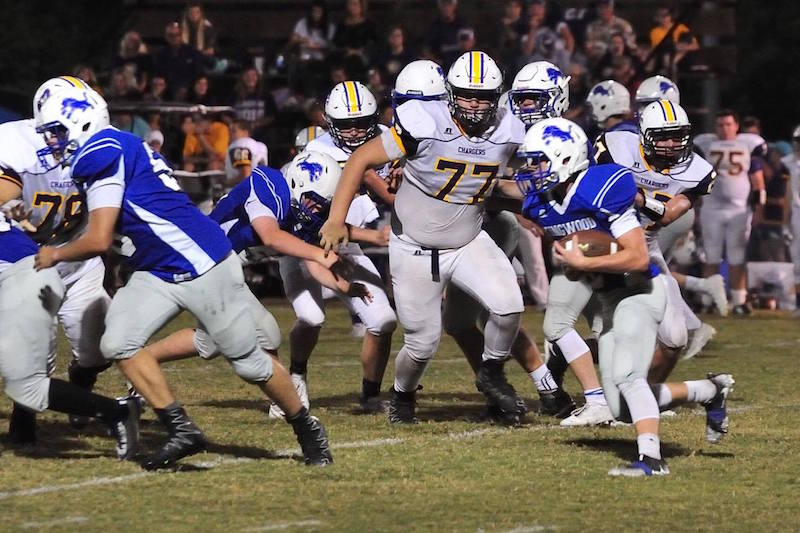 Landon Guy, No. 77, was recently named as one of 90 senior recruits to the Blue-Grey All American Game in Dallas, Texas at AT&T Stadium on Dec. 15. He made the cut to 90 out of 6,750 that tried out. (For the Reporter/Larry Dancy)

COLUMBIANA – Since the age of 5 years old, Landon Guy has graced the football field with a special knack for the game, but it wasn’t until recently that Guy realized he had the potential to reach his dream of playing not just college football in the fall, but also making it to the NFL—a dream he’s had since the age of 10.

Known as the “Big Fish” or “Land Shark” among his Cornerstone Charger teammates, Guy has taken his senior season by storm on both the offensive and defensive line.

It’s not just what he’s done this season, however, that has gotten the 6-foot-4, 290-pound senior so much attention. Since last year, Guy has been noticed more on the national stage because of his talent level and it led to an invitation to the regional combine for the Blue-Grey All-American scouts.

“Since the Lakeside game last year, Landon really took strides to being a great defender, while already being one of the best offensive linemen I’ve ever seen,” Lee said of his stud two-way player. “It’s led to a lot of warranted attention of what he can do.”

Guy impressed so many people at the combine in Prattville that he was invited to the super combine in Dallas, Texas, which took place at AT&T Stadium—home of the Dallas Cowboys.

The awe surrounding Guy continued to cultivate during his super combine, so much so that he was invited back to Dallas to compete in the Blue-Grey All-American Bowl on December 18. Guy was one of 90 senior recruits to be invited to the game out of 6,750 that tried out from around the country.

“I didn’t think I would ever be in this situation,” Guy said. “I never, never thought I would be considered at a skill level among some of the country’s best players, so it means a lot that I’m able to have this opportunity.”

It was an opportunity that almost passed Guy by because of his doubt that he could actually make it to Texas. Once the doubt started to creep into his mind, he didn’t even want to go to the combine because he didn’t think he had the skills, but the man that introduced him to the game at the age of 5, his father, stepped in to convince him otherwise.

“He sat me down and said, ‘Son, I know you can do this, I’ve seen you on the field and seen you go 100 percent. I know what you are capable of; you just have to show everybody else what you can do,’” Guy said. “He’s been the biggest influence, pushing me through everything in my career.”

While Guy continues to make waves, he is still facing the obstacle of trying to get to the next level, not to just live out his dream of college football, but also playing on Sundays in the NFL.

“I’ve had a bunch of people tell me that I’m not worth a lick on the football field,” Guy said. “Just showing them that I can do it has probably been the biggest obstacle I’ve had, but something that drives me every day.”

Guy said now that he knows he has the chance of playing college football directly in front of him, he has upped his game to impress people and prove the doubters wrong during his senior season with the Chargers.

“He’s the total package a college program is looking for and it’s right in front of him,” Lee said. “He just needs to go out there and do it now.”

Lee and Guy have both received calls from in-state schools interested in him, but no offers have been sent his way. But after teams start getting wind of his national attention, that’s something that could change very soon.

“It’s a dream I’ve had since the age of 10 since I saw guys competing professionally for a living and realized that’s something I could actually work toward,” Guy said. “Now I’m determined to go out there and make it happen.”