COLUMBIANA – A 44-year-old Alabaster woman will spend the next year in prison after she pleaded guilty to exposing her child to methamphetamine in a case begun after a local school cafeteria worker discovered meth residue on the child’s lunch money in August. 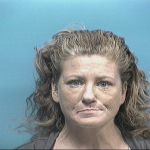 Heather Brooke Isaacs, who lists an address on King Charles Court, pleaded guilty to one felony count of chemical endangerment of a child during a Sept. 20 hearing in front of Shelby County Circuit Court Judge Daniel Crowson.

Crowson originally sentenced Isaacs to 15 years in prison, but split the sentence to one year in prison followed by two years of supervised probation.

Through a plea agreement with prosecutors, misdemeanor counts of possession of imitation drugs and possession of drug paraphernalia were dismissed against Isaacs.

The Shelby County Drug Enforcement Task Force arrested Isaacs on Aug. 25 and charged her with the three crimes.

The charges came after a lunchroom employee at a local school noticed a suspicious substance on a child’s lunch money and reported it to the school’s resource officer, Task Force Commander Lt. Clay Hammac said at the time of Isaacs’ arrest.

The Helena Police Department tested the substance, and determined it was traces of methamphetamine before reporting the situation to the Task Force, according to Hammac.

Hammac said Task Force officers and Department of Human Resources employees conducted a home visit and interview with the suspect, and discovered traces of methamphetamine use in the household.

“At the residence, we found what I would consider deplorable conditions, especially for a child,” Hammac said at the time of the arrest.

Following the home visit, the Task Force took Isaacs into custody and DHR placed the child in a safe environment.

Isaacs had been held in the Shelby County Jail on bonds totaling $17,000 since her arrest.