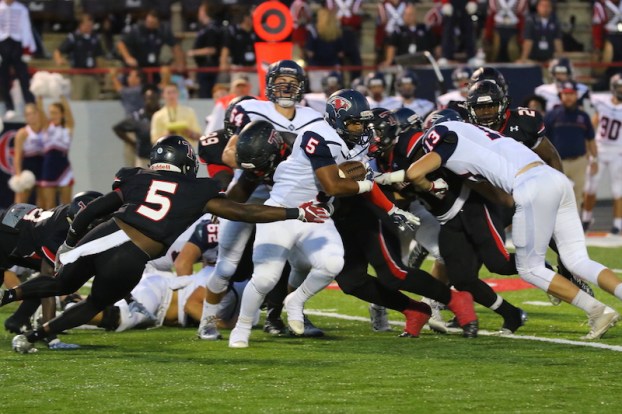 Thompson and Oak Mountain will take part in our Game of the Week this Friday night. It’s a game the Eagles won on a last-second Hail Mary a season ago. (File)

It’s going to be tough to replace a Week 4 slate of matchups that featured three top-10 games, but Week 5 of the high school football season doesn’t give very many teams a break.

For the third consecutive week, all 11 of our AHSAA teams will take to the field, most of which will be competing against region foes. We’ll break down all of those matchups, including our Game of the Week.

Thompson at Oak Mountain (Game of the Week)

The Eagles’ shot at a 4-0 start for the first time in school history was squandered away on Friday, Sept. 15, as their offense failed to convert on several opportunities in a 7-0 loss to Vestavia. Thompson, on the other hand, continues to build confidence and is coming off a 40-13 thumping of No. 10 Mountain Brook.

It’s a rematch of last year’s game that was won by the Eagles when Jackson Kimbrell completed a Hail Mary to Ethan Duncan as time expired. Thompson will not only be looking for redemption, but also hope to start the season 4-0 and more importantly 3-0 in region play, which goes a long way toward making the playoffs.

Oak Mountain has the type of team that can slow the Warriors down, not just because of its tough defense, but because of its offensive style that takes a lot of time off the clock—meaning the Eagles can keep the Thompson offense off the field. That being said, this Thompson offense has scored 124 points in its first three games and is averaging close to 500 yards per game, which will be too much for the Eagles to handle. Thompson 35 Oak Mountain 14

It’s a crucial game of rebounds for these two teams as the Jags look to bounce back from a heartbreaking 27-24 loss to Hoover and Mountain Brook looks to rebound from back-to-back losses, including last week’s 40-13 thumping from Thompson.

This week, I expect Braxton Barkers confidence to grow and the Jags’ two running backs in D’Arie Johnsn and Jalen Henderson to bounce back with a big performance. Spain Park 27 Mountain Brook 17

The Huskies are coming off a tough 29-25 loss to Pelham, but still look like an improved team. That’s in large part due to sophomore quarterback Luke Stamba, who has impressed in Lawson Peoples’ absence.

This week, Helena will get an undefeated 4-0 Homewood team that will likely be ranked inside the 6A top 10. The Huskies were able to bounce back from a tough opening-night loss to start the season and will be looking to do the same this week.

Unfortunately for Helena, the Patriots are one of the best defensive teams in the state, and while the Huskies will keep it closer than most expect, they’ll ultimately fall. Homewood 27 Helena 14

Chelsea is in a tough spot right after seeing its offense shut out for the first time since 2013 in a 27-0 loss to Benjamin Russell. Pelham, on the other hand, just rebounded with a nice win for the second time this season by taking down rival Helena 29-25.

The Panthers are playing much better right now and could easily be 4-0 at the moment, while Chelsea is struggling mightily on offense. Pelham 24 Chelsea 10

While Briarwood can’t fall asleep after its dominating performance last week, they do get a Fairfield team that is 1-2 overall. That beind said, it is an improved Fairfield team and the Lions need to be on their A game. Briarwood just has too much talent on both sides of the ball and is riding a ton of momentum. Briarwood 31 Fairfield 10

Calera has now won three in a row after its 29-27 loss to Mae Jemison to start the season, but now they’ll get a Demopolis team that is always the best in their region.

Last year, Demopolis beat Calera 38-13 on the road giving the Eagles their only region loss of the season, which was the difference maker in the region championship.

Calera has never beaten Demopolis in three matchups, and it will be difficult to see it happening this year. The Tigers have also won three in a row, but look much stronger defensively, giving up zero, six and six points in their last three games. Calera will have to have its best game of the season to pick up a win. Calera 14 Demopolis 28

Shelby County rebounded in a big way this past Friday. When it looked like the Wildcats were going to lose their second straight, they came back to beat Moody 27-21 in overtime.
Now they get a Wenonah team that was left reeling after its mind-boggling 34-0 shutout loss at Briarwood. The Dragons are still a very good team and have more talent than Shelby County, but the Wildcats’ style of play offensively can keep this game close. Shelby County 15 Wenonah 31

I’m still not sure what happened to Montevallo in its 51-6 loss to American Christian, but the Bulldogs responded exactly how they needed to with a 42-12 win over B.B. Comer this past Friday. They’ll get their second consecutive win this Friday night when they take on an 0-3 Midfield team that they beat 35-20 last year. It will be close, however, as all of Midfield’s losses have come to top 10 teams. Montevallo 24 Midfield 17

This is where it begins for Vincent. Now that the Yellow Jackets have their two toughest games out of the way, they’ll have a chance to reel off some wins and that’s exactly what I believe they will do. Fayetteville has given up 48 and 44 in its last two games and Vincent will take advantage. Vincent 28 Fayetteville 17