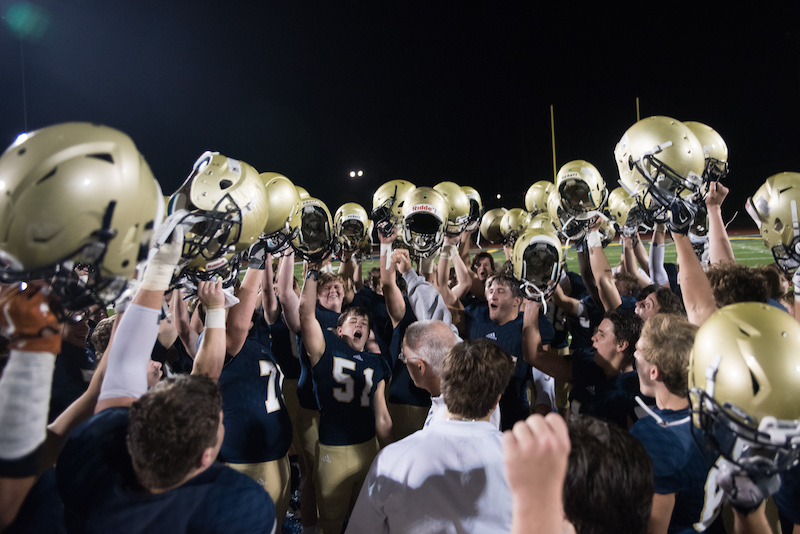 Briarwood remains the No. 1 team in the 5A classification. The ranking is the highest in the county as 7A teams Thompson and Spain Park sit at No. 3 and No. 6, respectively. (Reporter Photo/Keith McCoy)

After an exciting week of high school football in Shelby County that featured three matchups of top 10 teams, a change has been made in the latest Alabama Sports Writers Association rankings released on Tuesday, Sept. 19.

While nothing is drastically different about this week’s poll, the Oak Mountain Eagles did fall out of the Class 7A top 10 after their loss to Vestavia on the road.

The Eagles fell in a tough 7-0 defensive battle after an early-game interception gave the Rebels good field position. Vestavia capitalized and escaped with a victory despite not scoring the rest of the game. That was possible because of their defense and because the Oak Mountain offense sputtered on several great opportunities.

Oak Mountain may have looked like the better team overall, but fell nonetheless, which led to their drop from the standings. While the Eagles are no longer in the top 10, they didn’t drop far and sit as the first team out still receiving 16 points.

The remaining three teams that were ranked in the Week 4 poll, and have been ranked all season, remained in the exact same spots as they previously did.

Briarwood continued its run as the highest ranked team in the county coming in as the No. 1 team in the 5A classification and after its 34-0 destruction of the previously No. 5 Wenonah Dragons, the Lions proved the ranking was warranted moving forward.

With the Lions only having one difficult game left, against Mortimer Jordan, on their schedule, it’s looking like they will sit atop the standings for a while.

Also staying in the same spot were both Thompson and Spain Park in Class 7A.

Thompson has done nothing this year to disprove they are a top five team, or even the best team in the state. The Warriors are coming off a 40-13 win over No. 10 Mountain Brook last week, a game they led 40-0 at one point.

Thompson still has several tough games ahead, including No. 6 Spain Park and No. 2 Hoover in two of its last three region games of the season.

The Jaguars, despite falling to No. 2 Hoover 27-24, were able to hold steady at No. 6 in the 7A classification. It was a game Spain Park could have easily won as they held the lead in the last few minutes, but gave up a late touchdown to the Bucs leading to the Jags’ first loss of the season.

Spain Park now sits at 3-1 (1-1) on the season and still has tough games against Mountain Brook, Thompson and Oak Mountain remaining on its 2017 schedule.