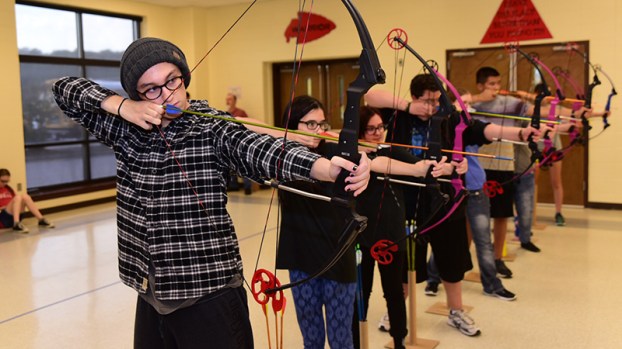 Members of the Thompson High School archery team prepare to shoot during a Sept. 21 practice in the school’s lunchroom. (Reporter Photo/Keith McCoy)

ALABASTER – One-by-one, each of the eight students placed their bows on the rack and patiently stood behind the safety line on the floor of the Thompson High School cafeteria on Sept. 21. After all the students in the group had finished and hung their bows on the rack, coach Ben Haase blew a whistle and the kids walked up to retrieve their arrows from the targets set up 7 yards away.

“Statistically speaking, this is the second-safest sport, next to ping-pong,” Haase said with a laugh as the kids examined the targets and tallied their scores.

Despite it being only their third practice of the year – and only their second to actually shoot – the THS archery team had already gotten off to a solid start on the season. Now in its third year, the team is looking to take a step up in district and state competitions this year.

“Last year, the middle school started an archery program, so this is our first year we’ve had freshmen coming in with experience already,” Haase said. “Now that we’ve got some solid experience, I think we’ve got a chance to be really competitive.”

But the THS archery team is about more than just competition.

“It gives more students a chance to be a part of something competitive. Archery is a mental process, and it teaches self-discipline,” Haase said, noting all members of the team must maintain a C average or higher.

“I like that the kids who come out for the team aren’t necessarily athletes. We have kids who are in choir, band and theatre,” said fellow archery coach Timothy Davis. “It gives kids a chance to take part in an after-school program when they may not feel they fit in with some of the other extracurricular programs.”

Coaching the team has also given Haase and fellow coach Timothy Davis a chance to learn more about a sport they’ve been involved with since childhood.

“I’ve been involved in archery since I was old enough to pick up a bow,” Davis said, noting Haase even received training from an FBI weapons specialist before becoming the THS archery coach.

While the team practices in the THS cafeteria now, it will have more room to practice at the city’s new high school, which is set to open in January.

“We’ve really enjoyed being a part of this program,” Haase said.