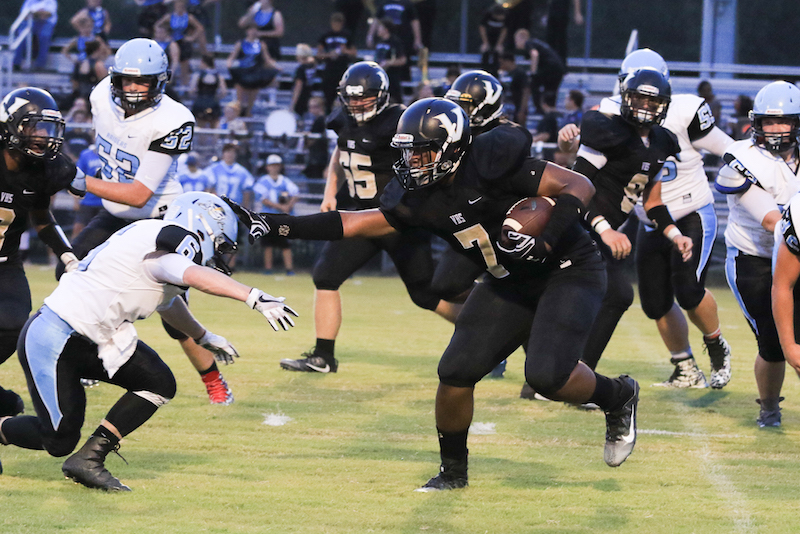 Vincent’s Chris Hardie had 171 yards and three touchdowns in the 38-7 win over Fayetteville to improve the Yellow Jackets’ record to 2-2 in 2017. (File)

VINCENT – Vincent came into the 2017 season having won just one game in the last two years combined, but on Friday night, Sept. 22, the Yellow Jackets beat that record in one year as they picked up their second win of the season in a 38-7 rout of Fayetteville on their home turf.

While Vincent has celebrated first downs and playing complete games the last two years, they were celebrating much more in their win. It wasn’t just the fact that the Yellow Jackets picked up a region win, but the fact they got to kneel on the ball to end the game.

“It’s funny because when you come here you celebrate first downs, but now we’re celebrating a region win,” head coach Wiley McKeller said. “It just means a lot to the kids because they haven’t had the chance to do that. We got to take a knee to run the clock out, which doesn’t seem like a big deal but it is to these guys. They feel like they just won the Super Bowl.”

A big reason for the celebrating and excitement was due to the performance of Chris Hardie, who ran the ball 16 times for 171 yards and three touchdowns. He had the Yellow Jackets final three touchdowns of the night that went for 34, 5 and 12 yards.

It didn’t take Vincent long to jump out in front as they scored early in the game on Homecoming night to go up 7-0 with 9:30 to play in the first quarter after a solid opening drive that was capped off by a Stanley Cooper rushing touchdown from seven yards out.

Not only did the offense come to play early on, but the defense showed up with its mind in the right state as well. That helped the offense stay patient as they put up another touchdown with 2:12 left in the quarter to take a 14-0 lead over the visiting Wolves when Zavien Kelley posted his lone receiving touchdown on a nice 13-yard catch.

After a quiet end to the first quarter and beginning to the second, Fayetteville finally put together a scoring drive and cut into the Vincent lead to make the score 14-7 with 5:04 left until halftime.

Vincent, however, answered in a big way not only scoring once before the half, but twice in the final 2:30 of the game to take a 28-7 lead into the locker room, which was created a big shift in momentum for the rest of the game.

The Yellow Jackets only needed one more touchdown with 6:32 left in the third quarter and a field goal with 5:21 remaining in the game to create the final score of 38-7.

“We’re still a work in progress, but it’s the byproduct of a lot of hard work,” McKeller said. “We started so stinkin low, but now we’re starting to put it together and do some positive things.

Dusty Davis was 13-for-15 at the quarterback position, throwing for 168 yards and one touchdown. Dontrelle Bruno led all receivers with 75 yards on five catches, while Stanley Cooper added 56 yards on three catches. Kelley grabbed the only touchdown catch and had 23 yards on two catches.

“Since the day I walked in the door, our whole deal has been to get better every day. We don’t look any further than Monday each week. I know that sounds silly, but we just want these guys to focus on one day and coach them up to fix errors.”

Vincent is now 2-2 overall this season and 1-2 in region play with their toughest two games of the season already behind them.