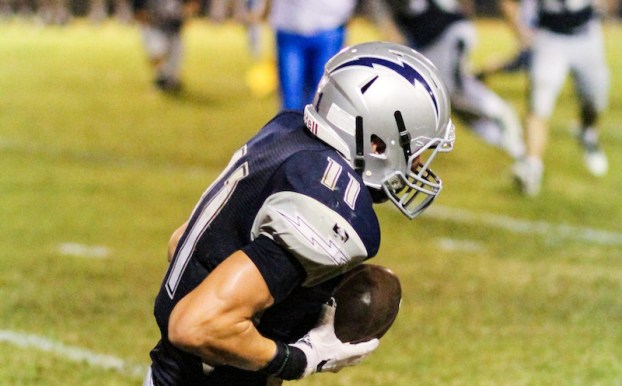 “It’s a tough one to take, especially when you feel like you’re better,” said ECS head coach Tim Smith.

Luke Sanders recovered a fumble on the opening possession of the game and Evangel eventually took a 7-0 lead in the first quarter on a touchdown pass from Tyler Henderson to Kamden Smith.

However a lightning delay, which lasted 35 minutes followed almost immediately in the first quarter.

When play resumed, Hooper found momentum. Trace Edwards found Mason Ivey for a game-tying touchdown with 10:02 to play in the second quarter and then hit Wyatt Barnett to make it 14-7 with 4:29 remaining in the half.

Evangel fumbled the ball away on its first possession of the second half and later fumbled again at the goal line while trailing 21-7.

Henderson and Smith connected for another TD to make it 28-14 in the second half. With just under two minutes to play in the game, Coleby Henderson looked to pull ECS within a touchdown, but his catch the end zone was negated by an offensive pass interference call. Hooper knocked away a fourth down pass on the next play to seal the win.

“The kids never quit. They played until the last whistle. It was 28-14 and we’re still battling and still throwing the ball down field. We had the touchdown called back and we still battled. What we take away from this is our kids will play until the very end,” Smith said.

Smith finished with nine catches for 115 yards, while Coleby Henderson had 249 yards receiving on 11 catches from his brother, Tyler, who threw for 350 yards, completing 25-of-41 passes. Seth Harrison had three catches for 41 yards.

Defensively, Hunter Green led the way with 10 tackles, while Nate Arvizu had six tackles and Cooper Vowell had five tackles and a fumble recovery.

Helena falls to No. 10 Homewood