Helena falls to No. 10 Homewood 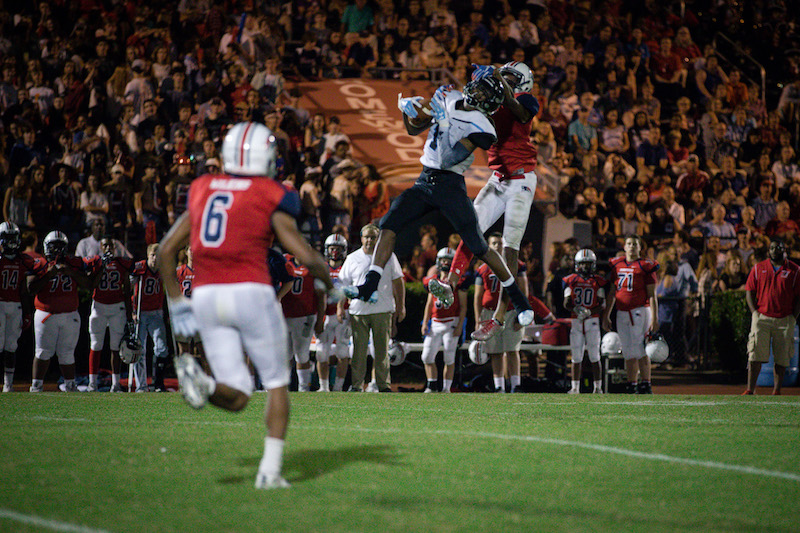 Justin Stuckey goes up to make an incredible catch over Homewood’s CD Daniels. Stuckey ended the night with 144 yards receiving and one touchdown. (For the Reporter/Adam Lee)

HOMEWOOD – A standout performance from Helena’s Justin Stuckey wasn’t enough on Friday, Sept. 22, as the Huskies traveled to Waldrop Stadium and fell to the undefeated No. 10 Homewood Patriots 37-7.

Stuckey ended the night with four catches for 20-plus yards on each one, which led to a receiving total of 144 yards and one touchdown in the difficult loss for the now 1-3 (1-1) Huskies.

The good news for Helena is that two of its three losses early in the season have come to a 7A Mountain Brook and 6A No. 10 Homewood, both of which were out-of-region games, meaning they have no implication on the playoffs.

Early in the game, Homewood made it known they were going to score with ease and quickly, while Helena showed some struggle.

The Huskies got the ball first and faced a third and 23, before sophomore quarterback Luke Stamba was able to find Stuckey for 41 yards and his first big reception of the night. Unfortunately, Helena was unable to take advantage of the big completion as they were forced to punt it away three plays later.

Homewood capitalized as they scored very quickly in four plays on a Nick McCoy 33-yard touchdown reception to take an early 7-0 lead with 8:15 remaining in the first half.

A Stamba interception on Helena’s next drive led to the Patriots getting the ball back quickly. It didn’t take long before they scored again thanks to two long runs from McCoy and a two-yard punch in from David Robertson as Homewood jumped up 14-0 with 5:15 left in the first quarter.

Helena went three-and-out in its next possession and on its own 39-yard line decided to fake a punt. Homewood was ready for it and stuffed the play of no gain forcing a turnover on downs.

Three plays later, quarterback Larkin Williams was able to sneak into the end zone behind his tough offensive line to give the Patriots a 20-0 lead with 1:46 left in the first quarter as the PAT was no good.

The game became more defensive for a while after that until CD Daniels of Homewood was able to grab a pick six with 2:40 left in the second quarter to give the Patriots a strong 27-0 lead.

Helena finally showed some life on its next possession as Stamba tossed a deep bomb on third down to Justin Stuckey, who jumped up and snagged the ball out of midair before turning up field and sprinting toward the end zone for the Huskies first score of the game.

It was a big score right before the half as Helena needed all the confidence it could get going into the second half.

Unfortunately, while Stuckey had several more big catches, Helena was unable to do anything the rest of the way as the Patriots added 10 second-half points to win 37-7.

Helena will have one more non-region game next week as they look to get everything figured out in a matchup with 7A Vestavia Hills at Helena High School before playing four consecutive region games that will determine the Huskies’ 2017 playoff fate.