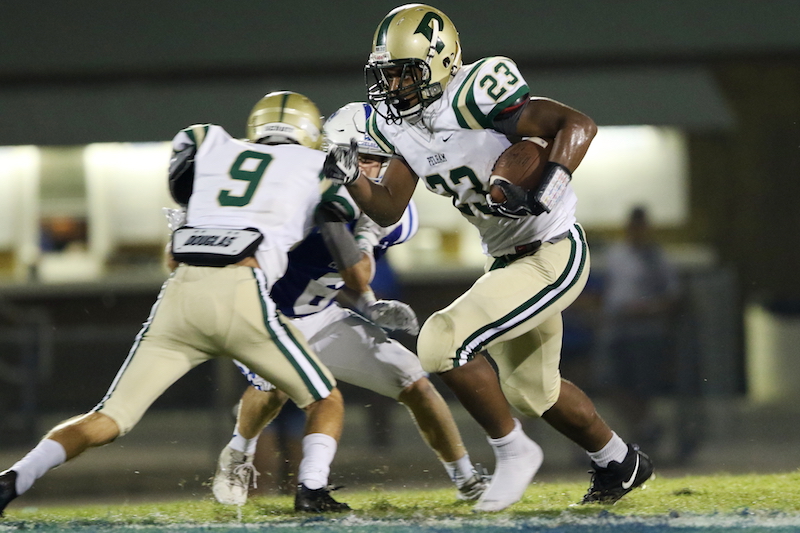 Pelham’s Dylan Peterson runs out of his shoe during the game. Peterson had a 68-yard touchdown run after receiving a shuffle pass from quarterback Matthew Rye during the first half. (For the Reporter/Eric Starling)

CHELSEA – After ending last week’s game with a big defensive stand, Pelham’s defense was hoping to continue their strong play against the Hornets of Chelsea.  When it counted in the second half, the Panthers defense made the stands necessary to secure the 36-23 victory and moved to 2-1 in the Region.

After holding the Hornets to a three and out to start the game, the Panthers started with great field position at their own 40-yard line.  Putting together an impressive eleven play drive, the Panthers scored on a fifteen-yard pass from Matthew Rye to Kasey Clark.  Gregory Blue hit the point after attempt and the Panthers led 7-0.

A hard hit on the ensuing kick-off return and the Hornets coughed up the ball giving Pelham the ball at the Hornet 29-yard line.  Unable to attain a first down, the Panthers brought Blue back onto the field and he split the uprights from 42-yards out for a 10-0 lead with 4:29 remaining in the first quarter.

Chelsea got on the board as the first quarter wound down, with a 31-yard touchdown pass from Turner Griffin to Colby Lambert.  Michael Middleton added the extra point making the score 10-7.

The teams traded possessions early in the second quarter with neither team being successful moving the ball downfield.

At the 8:50 mark of the second quarter, the Panthers were sitting on their own 32-yard line on first down.  Rye got rid of the ball with a short shuffle pass to Dylan Peterson and Peterson rumbled 68 yards for the touchdown.  A missed extra point left the margin at 16-7 for the Panthers.

Chelsea again fumbled away the ball on their next drive and this time the Panthers capitalized with the touchdown.  Nicolas Blackburn took the handoff from Rye and score from four yards out.  Pelham now led 23-7 with just over four minutes left in the first half.

From here, the remainder of the half was owned by the Hornets.  Chelsea quickly marched the ball 70-yards on eight plays.  Kendrick Simpson scored on a two-yard run and Griffin hit Michael Gibbs in the corner of the end-zone for the 2-point conversion.  This pulled the Hornet to within eight at 23-15.

After a muffed punt by the Panthers, Chelsea took possession on the Panther 32-yard line.  On the first play from scrimmage Victor Lindsey broke through the line and carry the ball all the way to the 5-yard line.  However, a penalty made it all for naught and bring it back.  The Hornets found themselves eventually facing a fourth and ten, and then Griffin connected with Collier Blair for the touchdown and then connected with Colten Carter for the 2-point conversion and a 23-23 tie at the half.

The Panther defense held Chelsea scoreless in the second half after being challenged by the coaching staff at halftime.  “I credit all our coaches for the way the offense and defense responded in the second half,” stated Panther Head Coach Tom Causey. “They came out and executed with scores and stops to secure the win.”

Pelham’s last touchdown was a two-yard run by back-up quarterback Xavier Lankford to start the fourth quarter.  Lankford replaced Rye under center in the second half after Rye reported soreness in his shoulder to the coaches at halftime.