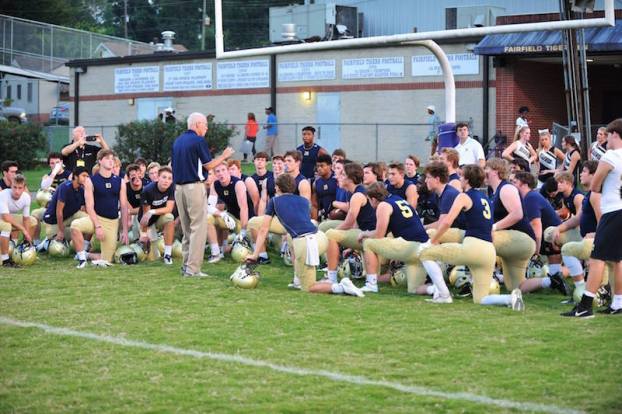 Briarwood head coach Fred Yancey talks to his team before taking the field against Fairfield. Not only did his team pick up a 23-6 win to remain perfect, but it marked his 300th win as a high school football coach. (For the Reporter/Larry Dancy)

FAIRFIELD – When a team starts 4-0 for the first time since 2011, normally the focus is solely on how well they performed, and while that was the case for the Briarwood Christian Lions on Friday, Sept. 22, there was another special accolade to celebrate.

When the final seconds ticked off the clock and the Lions had picked up a 23-6 win over Fairfield, head coach Fred Yancey had also picked up his 300th career victory coaching the game of high school football. It’s the second time in as many years that Yancey has celebrated a major achievement after grabbing his 250th win at Briarwood a season ago.

“It’s tribute to our coaches and players, who over the years have been anxious and willing to make it the best,” Yancey said after the historic victory. “It was a cool moment and it’s just been a fun ride thanks to so many people I’ve had the privilege of being around.

Yet again for the Lions, it was a strong defensive effort that led to the victory as they continue to dominate. They came into the game giving up just seven points per game and after giving up just six in this contest, that average will go down even lower.

Through four games, Briarwood has given up seven, 14, zero and six points on its way to a 4-0 overall record and 3-0 region record.

“As usual, it was a great defensive effort for us tonight that was key, Yancey said. “Our defense faced a very talented quarterback and group of receivers that made it hard on us, but our defensive line pressured they quarterback all night and forced some big sacks.”

One thing Yancey wasn’t happy with was the amount of fumbles offensively, which both Fairfield and Briarwood did on each of their first drives.

It didn’t take long for the Lions to correct that mistake and score a touchdown as Michael Hiers found Carson Eddy for a 30-yard touchdown with 7:14 left in the first quarter. After a failed PAT, the Lions had an early 6-0 lead.

The Tigers answered back on their ensuing drive with a 19-yard touchdown pass from Malachi Bennett to Tre Monroe to tie the game at 6-6 with 4:00 left in the first quarter.

From that point forward, it was all Briarwood as Hiers found Eddy again late in the second quarter, this time from 6 yards out as the Lions went up 13-6.

Briarwood was able to add to that lead when they blocked a punt with 1:47 left in the first half. Less than a minute later, Hiers punched in his third touchdown of the night to put Briarwood up 20-6.

That’s all the cushion the Lions needed to pull out a win as the defense shut down the Tigers the rest of the night. Noah Nall added a field goal in the fourth quarter to create the final score of 23-6.

If there were any thoughts that this Briarwood team would be lulled to sleep and not take Fairfield seriously after its 34-0 win over No. 5 Wenonah a week ago, they were put to rest quickly.

“Last week was a big win, but we had to shift gears this week and find the next opponent,” Yancey said. “I thought we did a good job of that. They certainly gave us a fight tonight, but our boys came ready to play and played with a lot of heart.”

Now Briarwood will take on a 3-1 Mortimer Jordan game next Friday in what should be a tough defensive matchup as the Blue Devils are only giving up 12 points per game.

“We’ve got another tough matchup next week with Mortimer Jordan, who I imagine is 3-1 right now, so we’ll have to keep bringing it and playing hard like we have up to this point in order to pick up another win,” Yancey said.

Montevallo falls in overtime at Midfield