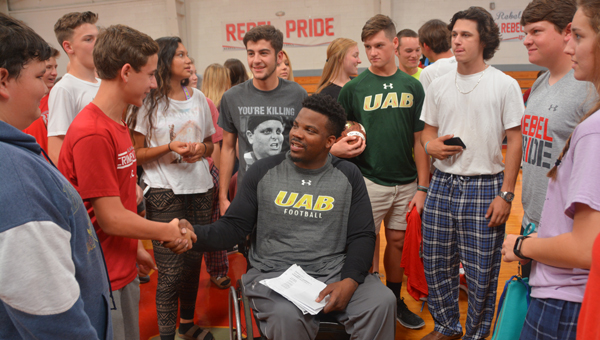 HARPERSVILLE – Tim Alexander knows what faith can do.

Alexander was once a rising football star who, after being paralyzed in a car wreck, fought through depression to become UAB’s director of character development and help resurrect the school’s football program.

Upon arriving at the school, Alexander said he knew from the trees rolled with toilet paper and students, teachers and administrators dressed up for Pajamas Day that he was visiting during Homecoming week.

“This is my type of school. I was just like you all,” Alexander said before encouraging the students to “live a life of homecoming every single day.” “You know why? Because tomorrow is not promised.”

Alexander’s visit to the school was arranged by CVA senior Stone Dorough, whose mother works with Alexander’s mother and met Alexander at a UAB football camp over the summer.

The speaker talked about struggling with depression after the wreck that initially left him paralyzed from the neck down (he has since regained use of his upper body and is determined to walk again).

A mentor told Alexander his story was not about him but about those he could help, said Alexander, who “found Christ again.”

“Everybody in here has a story about their life to tell,” Alexander said.

Alexander’s story includes walking, with help, to deliver the game ball on Sept. 2 for UAB’s first football game since the program was shut down in 2014.

Alexander said God told him to play football at UAB, though he was confined to a wheelchair. He attended a practice and even took part in drills.

Afterward, then-coach Garrick McGee made him a part of the program.

“I’m here because I didn’t give up,” he said. “You have to know what you want out of life. I showed up every day, worked hard and was appreciative of what I have.