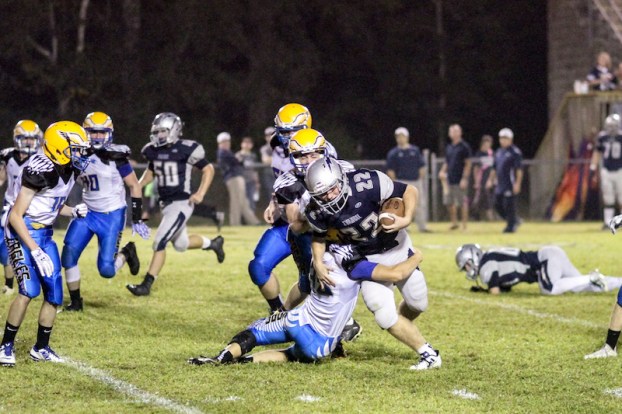 We have an impressive slate of matchups in the AISA and ACSC this Friday night as two games will not only be crossover games between the two county but county matchups as well.

There are highlights in each game as all three teams have a new head coach this season, one of which will face his old school. See letter from the editor at the bottom.

As he did for the past 20 years, Tim Smith will be roaming the sidelines when Cornerstone takes the field this Friday night against Evangel, but for the first time he will be doing so as the head coach of a different team.

Smith spent the last 20 years at Cornerstone Christian School leading them to much success, but during the offseason he decided to make a change and take over as head coach and athletic director at Evangel Christian in Alabaster.

In his first season, Smith has led the Lightning to a 4-2 start overall and a 2-0 start in region play.

This Friday night, Smith will face his old school where several of his old players will wait under the direction of first-year head coach James Lee.

Lee is off to a strong start of his own at Cornerstone having led the Chargers to a 3-2 start on the season, including a 1-1 mark in region play.

The only two common opponents each has played is another county foe in Hope Christian. The Lightning knocked them off for the sixth straight year in a 43-14 win, while the Chargers picked up a 50-14 win.

If you go by that stat, then both of these teams are fairly even heading into the matchup. While Evangel is an 8-man team and Cornerstone an 11-man team, both hold about the same size roster.

It’s a matchup that Evangel was able to win 32-14 last year in the inaugural meeting between the two teams. Both teams have explosive offenses and have defenses giving up close to 30 points per game. I expect a shootout, which is the way it should be in this newly dubbed rivalry matchup.

Just like the Cornerstone/Evangel game, Kingwood and Hope will meet for just the second time ever on the football field this Friday night with Kingwood holding a 1-0 edge in the series after a 21-14 win last year.

It was one of just two wins for the Lions all of last year, but this year they’ll get an improved Hope team. Both will be under the leadership of new head coaches as Todd Bradford is now leading Kingwood and Matt Davis has taken over at Hope.

The Eagles are off to a slightly better start at 2-3 having scored 88 and 92 in both of their wins, but being held to 14 in all three of their losses. Hope, an 8-man team, and Kingwood, an 11-man team, both sit at 1-1 in their respective regions and will be looking for a confidence win as they head toward the end of their season.

Kingwood is just 1-4 overall this season, however, and scoring just 16.6 points per game, while giving up 44.4 points per game. It should be a fairly even matchup considering the jump up a classification and while I like what both coaches are doing in year one, I think Davis, who was the team doctor a season ago, may have the leg up in the first matchup between these two new coaches.

It’s been a slow start for Dane Reece at Coosa Valley as the Rebels have started out 1-5. That being said, he is a great coach and guy that deserves a chance to get this program on the right path in the coming years.

Coosa Valley is scoring just 12.5 points per game having only scored more than seven points once in an out-of-nowhere 49-36 win over North River Christian.

They have scored six, zero, seven, seven and six in the other five games and have given up 39.7 points per game.

This week, however, they play a team that is much worse than them and should be able to get their second win. The Rebels will take on a winless 0-6 Sparta Academy team on Friday that is giving up 43.8 points per game and scoring just 13.7.

Coosa Valley has won two games in the last three years, both of which came last year, so a win Friday night could give them a confidence boost that could help in other winnable games against Kingwood and Evangel Montgomery in the following weeks.

Note from the Editor:

First off let me address the clear elephant in the room. After an email earlier today and a Facebook post made that has shown some displeasure in my coverage of the AISA and ACSC, I just want to apologize to everyone who feels I am not doing a great job of covering your school.

I know there are plenty of you that are happy and thankful for the coverage we give your team each Friday night during the football season and others think I can do a better job. It was definitely frustrating and upsetting to see some of the remarks made as I am a perfectionist, but as the sports editor, it is my job to continue to improve and do the best I can to cover all five of our AISA and ACSC schools. I will take all of your comments to heart and work as hard as I can to make as many of you happy as humanly possible.