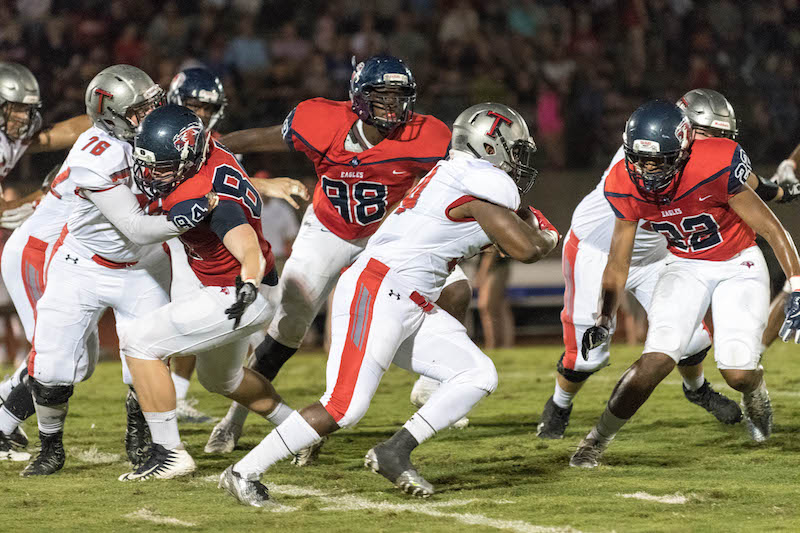 Thompson’s perfect record will be on the line as they play host to Pelham in this week’s Game of the Week between two county foes and rivals. (Reporter photo/Neal Wagner)

There were some buzzworthy storylines from Week 5 of the high school football season as Thompson made waves around the state with its dominating 49-14 win over Oak Mountain, Spain Park fell in double-overtime to Mountain Brook, Briarwood remained undefeated and head coach Fred Yancy picked up win number 300 and the Vincent Yellow Jackets picked up their second win of the season.

It’s evident that the last two weeks of high school football in this county have been unbelievable and now we’re already at the midway point of the 2017 season. There are no region matchups in Week 6 as all teams get a break from their dreadfully tough region foes, but big matchups still loom.

Pelham at Thompson (Game of the Week)

Thompson will be featured in the Game of the Week for the second consecutive week and it probably won’t be the last time as they still have tilts with Spain Park and Hoover left in the second leg of the season. This week they’ll face off against the Pelham Panthers, who come in 3-2 (2-1) on the season.

It marks the only in-county matchup for Week 6 of the season and features two teams having great bounce-back seasons. The Panthers took down Chelsea this past Friday to move above .500 in region play as well as overall. Pelham’s win also marked its first time winning back-to-back games since 2013.

While the Panthers have more momentum than they have in several years, they’re facing a different animal this week. Thompson comes into this game as the No. 3 team in the 7A classification with an undefeated record of 4-0 (3-0).

The Warriors have scored 40-plus points in three straight games and are putting up crazy numbers offensively as they’re averaging 500 yards per game and 42 points per game.

While I have been impressed with improvements by both teams and think Pelham is a playoff team this year, Thompson just has too many weapons to lose this rivalry game. Thompson 45 Pelham 14

Helena is coming off back-to-back losses and their game plan at the moment seems to be run, run, run, then throw deep to Justin Stuckey. It worked at times in this past week’s loss to Homewood, but not nearly enough as the Huskies only connected on one touchdown in the 37-7 loss to No. 10 Homewood.

This week, Helena will get 7A Vestavia, who has one of the toughest defenses in the state right now, meaning they will struggle to score again. The good news is it’s the Huskies’ second straight non-region game, giving them time to sort things out as they try to make a run at the playoffs in the second half. Helena 10 Vestavia 31

Chelsea remained winless after its tough 36-23 loss to Pelham this past Friday night, but some positives were shown. Trailing 23-7, the Hornets scored 16 unanswered points to tie the game at 23 as the offense finally showed a spark.

They failed to score the rest of the game, but maybe that’s the confidence boost this team needed offensively and they’ll be able to build off of it. Gardendale is the better team in this matchup having won three straight games, but Chelsea will shock somebody they aren’t supposed to beat this year. Chelsea 14 Gardendale 28

The No. 1 Briarwood Lions continue to impress defensively. After a 23-6 win over Fairfield, Briarwood is giving up just 6.8 points per game. They’ve allowed seven, 14, zero and six in their four games this year.

This may be the best overall matchup this week as Mortimer Jordan comes into the game 4-1 after three straight wins. Their defense is also playing great giving up just nine points in that three-game winning streak.

The two teams met twice last year, once in the regular season that saw the Lions pick up a 23-14 win, and also in the quarterfinals where the Lions won again 15-0.

Both of those came on the road, now Briarwood will host the Blue Devils on its home field. They are playing lights out defensively and for that reason should win a tight game to improve to 5-0. Briarwood 20 Mortimer Jordan 10

If you can be impressed with a loss, it’s Calera’s loss to Demopolis this last week. The Eagles fell 21-17 as a hail mary was intercepted to end the game, but it marked the most competitive game with Demopolis in a long time for Calera.

This week, the Eagles will get a very good Jackson-Olin team. This is a game that is very evenly matched despite the Eagles having to jump up a classification. The difference maker could be the heartbreak from a week ago still residing in the minds of the Calera players. Calera 21 Jackson-Olin 24

It’s a non-region game, but feels like a must-win for the Shelby County Wildcats. The reason? Springville is 0-4 and has yet to score more than 14 points, scoring just seven in three of those four losses. Short and to the point, Shelby County should win this one easily. Shelby County 28 Springville 7

The writing was on the walls for an 0-3 Midfield team to beat Montevallo this past week and it happened in a 42-34 win in overtime. Now the Bulldogs need a bounce-back win for the second time this season.

Bibb County, a 4A team, has won three in a row and looks like the better team in this one. It will be a close game, but the Bulldogs still have some growing pains to figure out as they head into the rest of region play. Montevallo 17 Bibb County 24

Vincent is coming off its second win of the season after defeating Fayetteville 38-7. Coming into the season, Vincent had won just one game in the past two years, now they’ve already topped that total through four games this season.