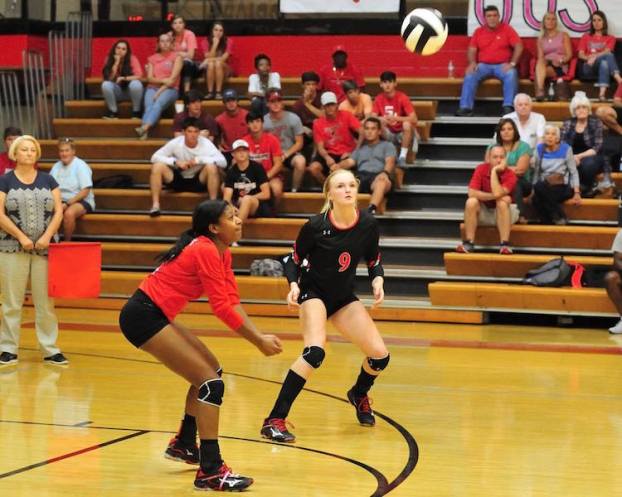 Thompson picked up a big area win over Vestavia on Tuesday, Sept. 26, to move to 2-1 in area play. The Warriors are now 5-1 since a loss to Hoover. (For the Reporter/Larry Dancy)

VESTAVIA – On a night of comebacks that saw the Pelham Panthers win three straight sets to beat 7A No. 7 Hoover, Thompson also joined in on the fun winning three consecutive sets against the Vestavia Hills Rebels to win a five-set thriller by the final of 3-2 on Tuesday, Sept. 26.

Thompson came into the match after a weekend trip to the Kentucky Challenge, where the Warriors took on some of the best talent from all over the Southeast. In the tournament, Thompson won its first two matches before dropping its third and then winning its last two.

The Warriors finished the tournament in fifth place out of 24 teams going 4-1 through their five games. The team also got the opportunity to enjoy a rare experience and took in a University of Kentucky volleyball game, the No. 12 team in college volleyball.

As if the weekend wasn’t a difficult enough challenge when No. 9 Thompson returned, not only did a top 10 matchup with No. 10 Vestavia await, but an area match as well.

In the early going, it looked as if the Warriors were a bit worn down after all of the travel and tough competition over the weekend as they dropped the first two sets 25-14.

Almost identically to Thompson’s last area match with Hoover on Wednesday, Sept. 20, the Warriors failed to hold a serve throughout and struggled winning multiple points in a row.

It was something head coach Judy Green wasn’t happy with, knowing that her team should have won that match.

Almost a week later, Thompson sat in the same position and rebounded in set three just like they did against the Buccaneers. The Warriors were finally able to string together some points and pulled together to run away from the Rebels in a 25-19 set-three win.

The turnaround from the first two sets was impressive and seemed to give Thompson new life as the Warriors used the swing in momentum to their advantage.

In the fourth set, the two teams battled back and forth for the most compelling set of the entire match. Thompson was able to grab a 24-23 lead and match point late and capitalized on the opportunity winning the set 25-23, leading to a fifth and deciding set.

In the final set, the Rebels didn’t seem to be any match for Thompson’s high-powered attack as the Warriors took their third consecutive set winning 15-9 to take the match 3-2.

The Warriors have now gone 5-1 since their loss to Hoover and hold an area record of 2-1 as a solid top 10 team in the state.

By ALEC ETHEREDGE | Sports Editor ALABASTER –It was a clean sweep for the Oak Mountain Eagles and Thompson Warriors... read more