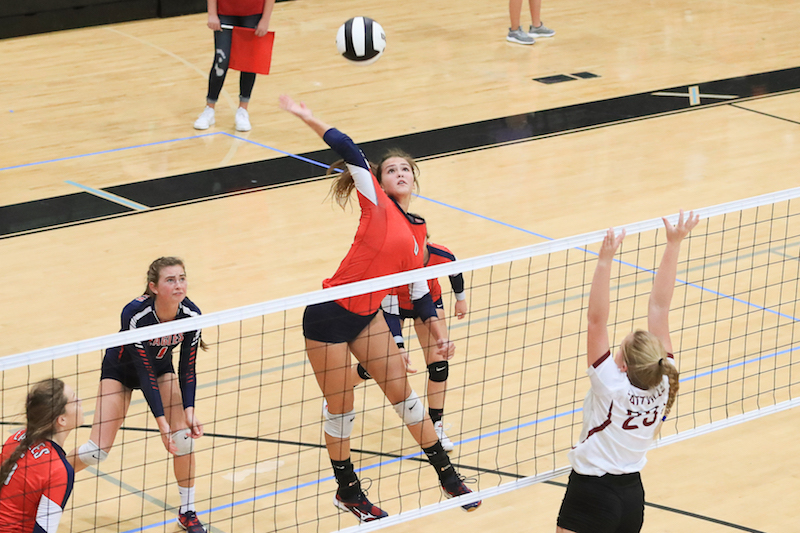 Oak Mountain is off to a 23-2 start to the 2017 volleyball season and looks like a legitimate state championship contender. (For the Reporter/Dawn Harrison)

The Eagles are the current No. 2 team in Class 7A and are playing like the best team in the state at the moment. After a strong showing at Spain Park’s Dig in the Park over the weekend, Oak Mountain came out and dominated Tuscaloosa County 3-0 to start the new week.

Oak Mountain has now won nine matches in a row and sits at 23-2 overall this season and 1-0 in area play.

Spain Park fell 3-1 to Mountain Brook on Tuesday night in a tough area matchup. The Jags had been on a roll in recent weeks, but a slight struggle has returned in the last few days.

Spain Park fell 25-11 and 25-14 in the first two sets, but bounced back in the second set, winning 25-15. That brought them within one set of tying, but the Spartans were determined to end the match in the fourth set and did just that, winning 25-11.

Montevallo took down Jemison 3-1 on Tuesday night behind 18 kills from Tkila Hill, which led the team. The Bulldogs started slow, falling 23-25 in the first set, but rebounded with three straight set victories.

The Briarwood Lions continued an up and down start to the 2017 season by splitting a tri-match with Wenonah and Ramsay. The Lions started strong by winning the first match over Wenonah 2-0 behind set wins of 25-15 and 26-24. Briarwood struggled mightily, however, with a good Ramsay team, falling 25-8 in set one and 25-18 in set two to lose the second match 2-0.

Calera was able to pick up an easy 3-0 sweep of Marbury to start Week 5 of the volleyball season. It started with a dominating 25-8 first set in which the Eagles rarely gave up serve. They were able to follow that up with consistent wins in the next two sets taking set two 25-18 and set three 25-17.