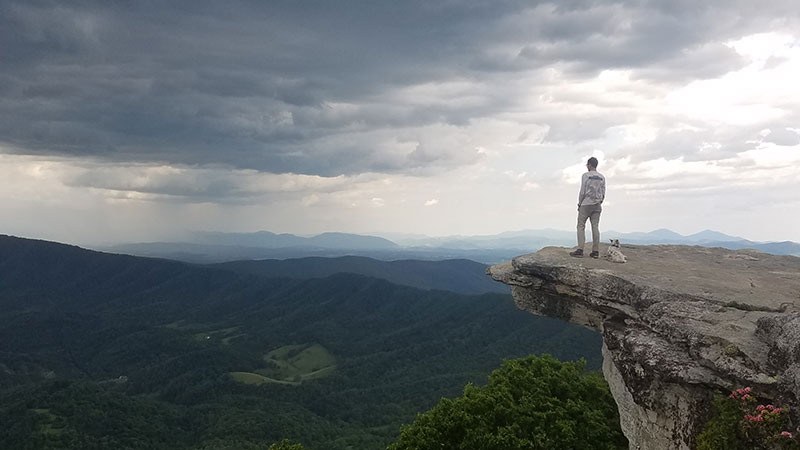 Autry’s journey to hike the Appalachian Trail was a bucket-list item that became a reality. (Contributed)

It was a combination of strength, determination, and tuna fish lunches that allowed Daniel Autry to complete the 2,189 mile trek of the Appalachian Trail.

What started out as a bucket-list item became a reality on March 8, when Autry, 32, started his journey in Springer Mountain, Ga.

“I read a book about hiking the Appalachian Trail when I was about 17 or 18, and always told myself I wanted to complete it when I turned 30,” Autry said. “When I started my hike I was only 31, so I like to think I only missed it by one year.”

Autry was not a seasoned-hiker when he decided to take six months off from his job to complete the adventure.

“I did a few hiking trips when I was in high school, but it was never more than two nights,” Autry said.

On Sept. 16, Autry completed his hike at Mt. Katahdin, Maine with an awe and appreciation for the journey.

While he started out hiking alone, Autry met other hikers on the trail that hiked alongside him.

“I finished the trail with four people that started on the same day,” Autry said. “It was really neat to meet people that were like-minded. The hike was a lot of work, it is very fulfilling and a lot of fun, but it is also painful and tiring so it is nice to have the camaraderie with people that know exactly what you are doing.”

Another friendship Autry made along the way was with a four-legged, furry, companion he adopted off of the trail in Erwin, Tenn.

“My dog went the rest of the way with me,” Autry said. “I give him a lot of credit because I didn’t see a lot of bears with him around. He went everywhere I did except for the last leg of the journey he couldn’t go up to the summit at Mt. Katahdin, but everywhere else he went with me.”

While the concept of “unplugging” from the real-world was one of the things Autry enjoyed about the trip, he did carry his cell phone with him and checked in with family members every four days.

“I would call and talk to my parents and let them know where I was on the trail,” Autry said. “They had bought a map/wall poster, so each time I would call they would place a pin on the location of where I called from.”

A typical day along Autry’s journey consisted of him waking up around 7 a.m. where he would follow a somewhat traditional work day schedule, taking a break for lunch, and wrapping up around 6 or 7 p.m.

“I don’t believe there was a lunch I had during the entire trip where I did not eat tuna,” Autry said.

A highlight along Autry’s trek consisted of “trail magic” where individuals from all walks of life sit along the roadside and pass out “spirit lifters” to hikers along the trail, often consisting of ice-cold Coca-Cola, chips and fruit.

“Those are hot commodities along the trail, and it is amazing how much it lifts your spirits to be walking halfway between a trail, and you aren’t expecting anything and then there is someone sitting there waiting on you with a cold Coke,” Autry said. “It is amazing that people take the time out of their day and wait just so a hiker can have a treat.”

While the intrigue and popularity to hike the Appalachian Trail continues to grow, Autry said the demographic is shifting to more middle-aged individuals, and females.

“Several decades ago the primary demographic would have been kids right out of college or people in theirs 60s,” Autry said. “That is definitely changing so you see more women on the trail, and more middle-aged individuals. It was such an amazing experience. I wish everyone could have the chance to hike it.”