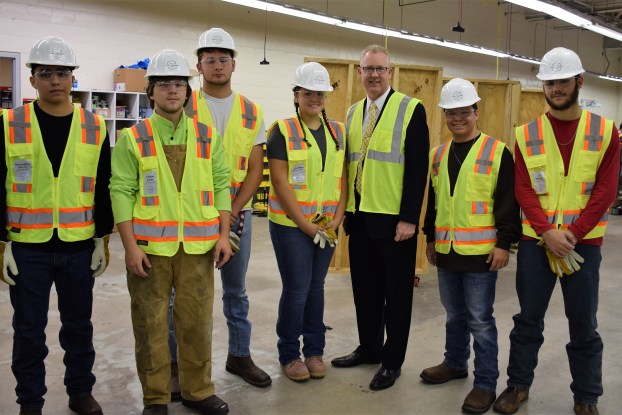 PHS Superintendent Scott Coefield visits students who are learning about skilled trades at the Academy of Craft Training. (Contributed)

PELHAM – Several students at Pelham High School recently started their second year at the Academy of Craft Training. According to Pelham City Schools Career Coach Katie Cardwell, 16 juniors and seniors are bussed to the Alabama Workforce Training Center every morning to learn about masonry, construction, welding, HVAC and electrical trades.

“When they graduate, they are workforce ready,” Cardwell said. “This program is really helpful for students who want to attend trade school.”

Cardwell said the Academy of Craft Training simulates real work-related scenarios to get students get acquainted with their future careers.

“My favorite thing about the program is that it’s work-based learning,” Cardwell said. “The students clock in and out for classes every day, and they have to call in when they’re out for the day.”

“They treat it like it’s a real job,” senior welding student Josh Brantley said. “You can get fired, you have to call in of you can’t come, you have to wear all of your safety equipment.”

Brantley said he appreciates the emphasis that the academy places on safety.

“Safety is the main thing at any job site,” Brantley said.

Senior Christopher Hernandez, a second-year student who is studying to be an electrician, said he has learned many applicable skills through the Academy of Craft Training and anticipates that he will find a job shortly after he graduates.

“We’re learning how to make sure safety applies to every job and how the real work environment works,” Hernandez said. “It gave me an easier opportunity to find jobs than the typical out-of-high-school student. It benefits me in every way possible.”

Sabrina Ross, a senior who is studying welding, was recently named the academy’s Employee of the Month. She said she decided to participate in the Academy of Craft Training in order to pursue a career before starting college.

“I wanted the opportunity to be in a vocational-based job before college,” Ross said.

As the academy’s only female PHS student, Ross said she is offered the same opportunities as any other student.

“Being the only female student helps me put myself on the same plane in the field,” Ross said. “I’m treated the same way as any male student. We’re taught the same and we’re criticized the same, but in a good way.”

Ross said she is thankful for the instruction she has received from the Academy of Craft Training and considers it an honor for herself and her fellow students.

“This is a good opportunity,” Ross said. “It instills a lot of commitment. It’s a privilege to be in a program like this.”