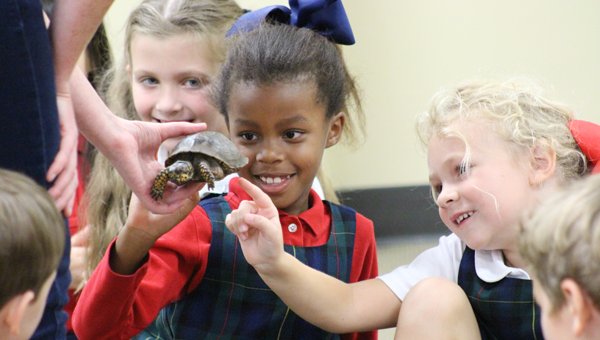 NORTH SHELBY – Westminster School at Oak Mountain first graders in the past have visited Ruffner Mountain Nature Preserve as part of their study of animals, but this year the animals came to them.

Ruffner Mountain Programs Director Christine Johnston talked about a screech owl, box turtle and corn snake on Friday, Sept. 15, while showing the animals to about 45 students.

“In the past, our first graders have visited Ruffner Mountain Nature Preserve as the culmination of our study of reptiles,” first grade teacher Mary Catherine Godfrey said. “It has also been used as an introduction to our later study of birds and owls. This is a new program for us in that we are not going on-site but rather Ruffner Mountain is bringing the animals to us.”

Ruffner Mountain is a 1,038-acre urban nature preserve in Birmingham with a mission of advancing the understanding of ecology. For more information, visit RuffnerMountain.org.

The Westminster students were first introduced to Iggy the screech owl, who was struck by a vehicle, rehabbed at the Alabama Wildlife Center at Oak Mountain State Park and then donated to Ruffner Mountain.

The group discussed how screech owls are nocturnal, meaning they are active at night.

Johnston also talked about how owls have two stomachs. They eat mostly mice but can not digest fur and bones, which collects in one of the stomachs and is then coughed up.

Students were able to handle a feather from a great horned owl and compare it to a screech owl feather.

Romeo the box turtle was the next to be presented, as the first graders learned about his shell and claws, and how box turtles are opportunistic feeders and can live from 30-70 years.

Finally, the students saw an eight-year-old corn snake that had been raised in captivity.

Johnston explained that snakes need to shed their skin, can live 20-25 years in captivity and are welcomed by farmers.

“The corn snake eats mice and rats, and those mice and rats eat the farmer’s crops,” she said. “It’s natural pest control.”

Sarah Wolf said the snake was her favorite.

“I like him because of his camouflage,” Wolf said and added that she was excited to learn that the corn snake is darker on top of its body and lighter underneath so that it is hidden whether on the ground or in a tree.

Godfrey said the students’ begin their studies with the different animal groups, then delve into reptiles and then birds.

The week before the visit from Ruffner Mountain, Westminster Upper School teacher Gregg Thompson showed the students a leopard gecko, and later in the school year, they will hatch chicks in their classrooms.

“We try to get as many live animals in front of them as possible,” Godfrey said.