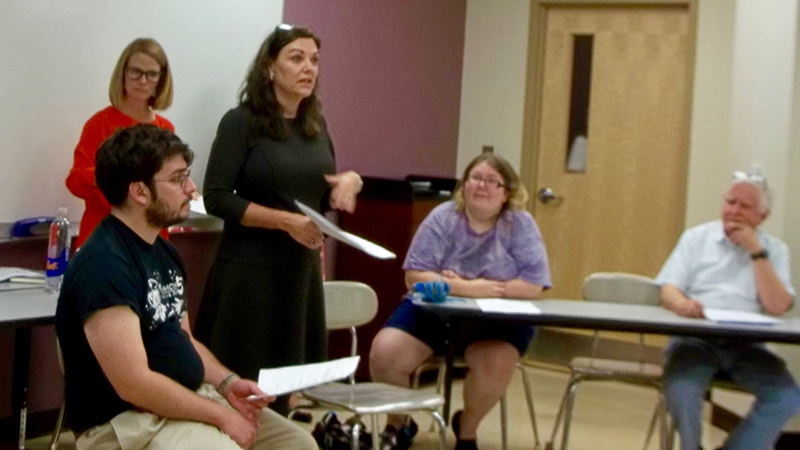 Sally B. Hardig, left, explains discussion issues as her break-out group listens during a Sept. 28 forum at University of Montevallo on Main. (Contributed/Nancy Wilstach)

MONTEVALLO – A proposed Montevallo city ordinance to protect LGBTQ persons against discrimination in employment, services and housing drew a much bigger crowd than anticipated to a forum on Sept. 28.

The gathering of about 120 people at University of Montevallo on Main broke into three discussion groups. The central issue in all three groups seemed to be why or whether the city actually needs an ordinance to outlaw discrimination based on sexual orientation or gender identity.

Several speakers called for the ordinance to be adopted by the City Council as an added protection for LGBTQ students and adolescents.

A Brierfield mother described a teen daughter who was refused a ticket to her prom because she wanted to go with her girlfriend, a circumstance that led the mother to deeper understanding of the need for community support.

A Montevallo father spoke of a gay adolescent son: “This says something as a community. Passing this ordinance would make the whole family (of an LGBTQ child) feel safer.”

A pastor said the ordinance was not necessary and might be used to accuse people of discrimination who were merely following their religious beliefs.

When the groups had talked for almost two hours, the forum seemed to be achieving its objective, which was not conversion to, but comprehension of, others’ viewpoints.

“We are better than other communities who talk ‘at’ each other,” said Mayor Hollie C. Cost. “In Montevallo we talk ‘with’ each other.”

Donna Ploessl (cq) lives in Tuscaloosa and recently accepted a teaching position at the University of Montevallo in special education.  “I came because I am considering moving to this community and want to find out about it.”

Cost said that she hoped that “each of us learned something we didn’t know tonight.”

A woman who travels with her gay brother and his husband occasionally said that the men, in their 60’s, “always check out hotels first to make sure they are not unfriendly to gay people.”

A mother of three said the city didn’t need the law. “I always check out hotels to see if they are child friendly, and if a business is not friendly, you can always boycott it.”

Others said they had not heard any complaints from LGBTQ people about their treatment in Montevallo.

Gregory L. Reece reminded his group that “50 years ago, nobody talked about race problems. Without some kind of protection, it is kind of difficult to voice complaints.”

Robert Pierson, retired teacher and coach, summed up by asking his group: “Let’s turn this around.  If this ordinance is passed, who is it going to hurt?”

Bruce McClanahan used that teacher’s friend—a chalkboard—to explain the issue.  He drew a lot of dots in a big circle and a few dots in a small circle.

“All those in the big circle have rights protected by laws.  All (the ordinance) does is expand that circle to include this group (the small circle) which has no protection. One subset becomes part of the greater subset,” said McClanahan.

The city jointly sponsored the forum along with the David Mathews Center for Civic Life, and participants completed surveys at the conclusion. Dr. Mark Wilson of Auburn University helped coordinate the forum on behalf of the Mathews center.

Participants also filled out surveys about their forum experience which Cost said the council and the Mathews Center would study.

Montevallo missed the chance to be the first city in the state to adopt an LGBTQ nondiscrimination ordinance when the Birmingham City Council passed such a measure Sept. 26.