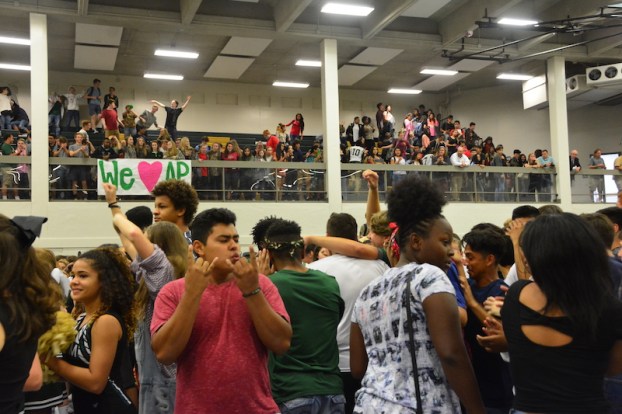 PHS students who made qualifying scores on AP exams for the 2016-2017 academic year received recognition at a pep rally on Sept. 29. (Reporter photo/Amalia Kortright)

PELHAM – Pelham High School students who made passing scores on last year’s advanced placement tests were celebrated with a pep rally in the PHS gym at around 2 p.m. on Friday, Sept. 29.

Bogert said the event involved all of the aspects of an athletic pep rally, including cheerleaders, the dance team and the marching band.

“We have a long-standing tradition of recognizing our students, whether they’re on the field or in the classroom,” Bogert said.

According to Pelham City Schools Curriculum Coordinator and Career Tech Director Shannon Bogert, the purpose of the pep rally was to honor students who scored a three out of five or above on their exams.

“I hope it makes them feel very happy, appreciated and celebrated,” Bogert said.

In addition to the pep rally, Bogert said PHS was able to give each student a $100 Visa gift card for every qualifying score they made through a grant from the A+ College Ready program. This year, a total of $9,400 in gift cards were distributed to students.

Senior Destiny Reid, who took AP English Language and Composition as a junior, referred to the pep rally as “unexpected” and “a motivator.”

In addition to receiving college credit for her score, Reid said she plans to use the gift card to contribute to her college fund.

“Getting $100 is great for just taking a test and passing it,” Reid said. “You have to take tests for regular classes anyway, so this is a win-win.”