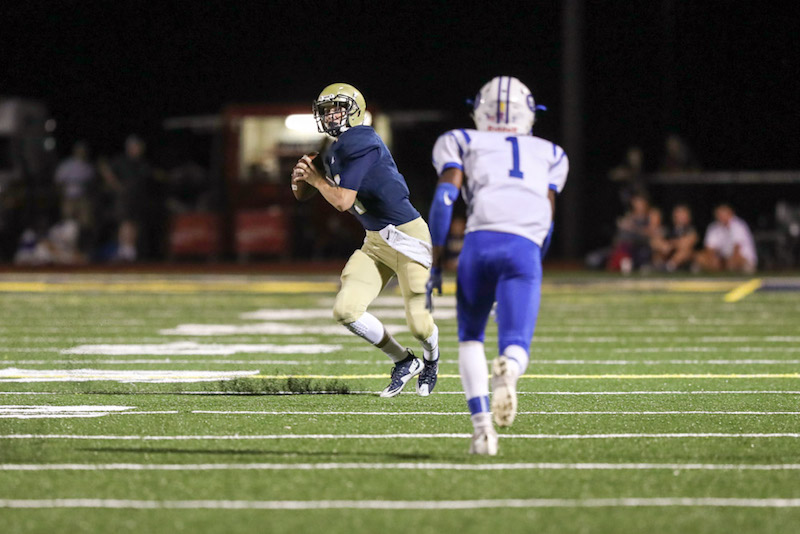 Michael Hiers had another stellar game throwing for close to 200 yards and combining for three touchdowns on the night as he led the Lions to a 25-17 win over Mortimer Jordan. (For the Reporter/Todd Kwarcinski)

NORTH SHELBY – Despite one of the most interesting special teams games you’ll ever see, the Briarwood Lions were able to play from in front and hold on for their fifth straight win to start the 2017 season 5-0 with a 25-17 victory over Mortimer Jordan on Friday, Sept. 29, at Lions Pride Stadium.

After playing two games on the road a season ago against the Blue Devils, one a 23-14 thriller in the regular season and the other a 15-0 defensive battle in the quarterfinals of the playoffs, Briarwood finally got to host Mortimer Jordan on its home turf and the excitement was buzzing from the opening kick.

“That was a good tough game,” Briarwood head coach Fred Yancey said fresh off his 300th win a week ago. “Mortimer Jordan has a good team, but I was pleased with the effort. Everybody was playing hard out there.”

The effort of the Blue Devils led to them challenging the No. 1 team in the 5A classification closer than anybody else had this year, which was to be expected with the way both defenses were playing coming into the matchup.

“We anticipated that it would be a tough game,” Yancey said. “I felt good about the way we battled, a few things here and there and we’ll be better.”

In a game that it felt like Briarwood had been the better team throughout, Mortimer Jordan had a chance late in the game to tie things up. Trailing 25-17 with 2:59 left in the game, the Blue Devils faced a third-and-10 just on their own side of the 50.

Mortimer Jordan’s Kourtlan Marsh heaved a pass down the far side line into double coverage, which allowed Cade Dickinson to jump in front and pick the ball off to ice the game. It marked the second time in three games Dickinson had a clutch interception as he also did it in the blowout of Wenonah.

The strong performance started in the first half as Michael Hiers was doing it all in the early going.

After a fumbled punt by Carson Donnelly gave Mortimer Jordan two possessions before Briarwood got its first, the defense—as expected—stood tough.

Briarwood finally got its first drive with 8:41 to play in the first quarter and they made the most of it. The Lions followed a 9-yard pass from Hiers to Hudson Hartsfield to start the game with three straight runs.

That opened up the deep ball for Hiers and he took advantage. On the ensuing play, he connected with Hartsfield for 33 yards on a miraculous catch that was initially bobbled, and one play later he threw it deep again, this time to Carson Eddy who grabbed a 39-yard touchdown catch for back-to-back bombs.

After a failed 2-point conversion attempt, the Lions had taken an early 6-0 lead.

Mortimer Jordan answered with a field goal on its ensuing drive to cut the lead to 6-3.

Briarwood showed some promise on its next drive that lasted nine plays and went into the second quarter, but eventually turned the ball over on downs.

It didn’t take long for Marsh and the Blue Devils to capitalize as they marched right down the field and behind a 24-yard touchdown run from the quarterback, Mortimer Jordan took its first lead of the game at 10-6.

On the Lions ensuing drive, they faced a first-and-15 from the Blue Devils’ 25-yard line after three strong runs by J.R. Tran-Reno. Hiers took the first-down snap and scrambled before rumbling 23 yards up the field inside the 5-yard line.

Three plays later, Eddy punched in his second touchdown of the night, this time out of the backfield to put Briarwood back on top. This time they attempted the PAT, but it was blocked and the Lions held a 12-10 lead.

Mortimer Jordan didn’t move the ball at all on its next possession, but on fourth down and two, facing a punt on their own 16-yard line with 1:00 until the half, the Blue Devils inexplicably decided to fake a punt. It was stuffed for no gain and the Lions were back in business.

It took just three plays before Hiers used his legs again to scramble for an 11-yard touchdown run. After another blocked PAT, Briarwood held a 18-10 lead at the half.

The chaos on special teams between the two in the first half featured two missed extra points, a failed 2-point conversion attempt, a fumbled punt return and a failed fake punt.

That being said, Michael Hiers had a solid first half that featured 123 yards passing and one touchdown through the air and an additional 40 yards rushing and another touchdown on the ground.

“He’s doing some great stuff,” Yancey said. “We’ve got a lot of guys that are capable of doing big things and when we aren’t shooting ourselves in the foot, we’re going to be a pretty good team.”

He continued playing strong into the second half and Tran-Reno showed why he is considered one of the best athletes on the field as well.

After neither team did anything on their first drive, Briarwood got the ball back for its second drive of the half and went on a strong seven-play drive.

It was highlighted by two 15-yard passes in a row to Tran-Reno, before he hauled in a third in a row for a 25-yard touchdown grab to give the Lions a padded 25-10 lead with 3:00 left in the third quarter.

Briarwood was able to force a fumble on the next drive, which was recovered by Carson Kolb and set the Lions up on Mortimer Jordan 27. They had a real chance to score and put the game away with a short field heading into the fourth quarter, but instead attempted a fake field goal after failing to get a first down and fumbled the ball.

It led to the Blue Devils getting great field position after a strong return on the fumble and a personal foul put them on the Lions 11-yard line. It didn’t take long for them to score and cut it to 25-17.

Mortimer Jordan had two more strong chances to score, but ended up failing to put together a scoring drive and fell by the final of 25-17.

Hiers had 188 yards passing and three total touchdowns in the game, while Tran-Reno ran for 75 yards and had 91 yards receiving for 166 all-purpose yards and two touchdowns.

Briarwood is now 5-0 for the first time since 2007 and will take on St. Clair County on Oct. 6, who just picked up their first loss of the season after jumping into the 5A rankings.

“This is what our hope was,” Yancey said of the 5-0 start. “We weren’t betting on anything, but this is exactly the start we were hoping for.”