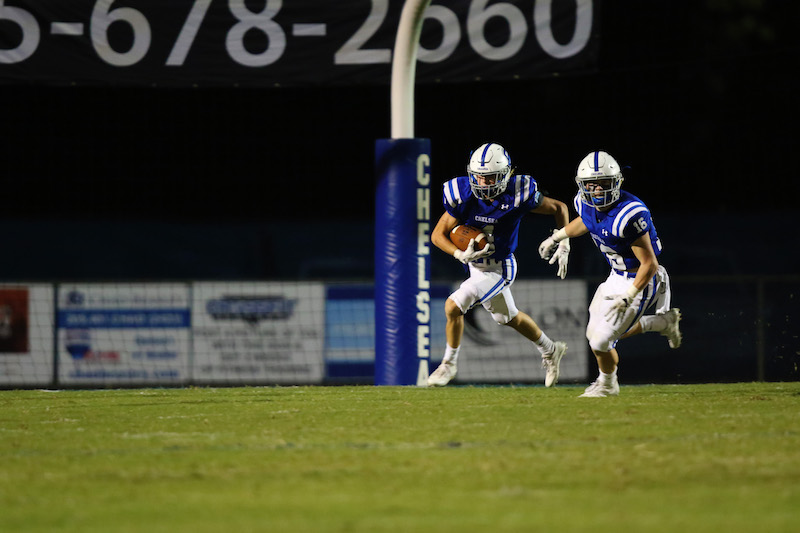 Chelsea is still searching for it's first win of the season after a 41-28 loss to Gardendale and tough schedule in the first half. Three of their last four games are much more manageable. (For the Reporter/Cari Dean)

GARDENDALE – After a hard-fought 41-28 loss at Gardendale on Friday, Sept. 29, the Chelsea Hornets are off to their first 0-6 start since the 2001 season when the Hornets finished 0-10.

Each of the last two weeks, despite losses, the Hornets have had some positives to build off of. On Sept. 22, in a matchup with Pelham, the Hornets trailed 23-6 before scoring 16-unanswered points to tie the game. Although they went on to lose 36-23, it was the best their offense had looked all season.

That same progression was made in Week 6 against Gardendale as Chelsea scored five more points to have their best offensive showing of the season. As they head into a bye week, that’s something they can use for momentum moving forward into the last four games of the season, two of which against Chilton County and Helena are very winnable.

Despite the loss, and the slow start to the season, Chelsea came to battle on Gardendale’s Homecoming night.

After the Rockets shot out to a 7-0 lead behind a short touchdown run from Stephen Lancaster with 3:04 left in the first quarter, Chelsea responded very shortly after on its ensuing drive when Kendrick Simpson took a 55-yard run to the house to tie thigs up at 7-7 near the end of the quarter.

In what started early as a back-and-forth affair, it didn’t take long for Gardendale to answer. The Rockets were able to score on the first play of the second quarter thanks to a 29-yard touchdown pass to take a 14-7 lead.

But just like he did the first time around, Simpson answered with a 3-yard touchdown after a long drive by the Hornets on their next possession to tie the game up for the second time.

The battle Gardendale found themselves in forced them to wake up and they did just that by scoring the game’s next 24 points to run away and take a 38-14 lead midway through the third quarter.

Chelsea added two touchdowns late, one on a 34-yard touchdown catch by Colton Carter and the other a Collier Blair touchdown run, while the Rockets added a field goal for the final of 41-28.

Chelsea’s 0-6 stat has been in large part because of a schedule that has featured teams like 7A Oak Mountain, 5A No. 1 Briarwood, 6A No. 5 Weumpka, 6A No. 9 Benjamin Russell as well as a good Pelham team.

While they still have a tough Opelika team the first week off their bye, the Hornets have winnable games against Chilton County, Helena and Cullman remaining. They will not end this season winless.