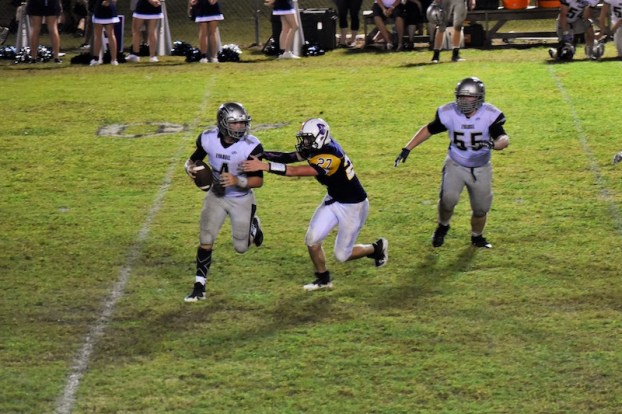 Evangel's Kamden Smith, No. 4, did it all for Evangel int he 14-7 win over Cornerstone. He picked off a pass defensively and ran for 121 yards offensively. (For the Reporter/Celia Martin)

Evangel used several red zone interceptions, including one with under two minutes to play by senior Kamden Smith, to hold off Cornerstone for a 14-7 win. It was his third interception of the game.

“Those interceptions were definitely a team effort. We put pressure on the quarterback (Rhett Garrett) when needed. It was a right place at the right time type of deal,” Kamden Smith said. “We knew this was a big one for coach with his history at Cornerstone and how successful he was there. Everyone on the field was doing this for him tonight.”

The win is the third 11-man football win of the season for Evangel and the second-straight over Cornerstone, where Tim Smith was head coach for 19 seasons. ECS beat Smith’s Chargers, 32-14, last season in the county rivalry’s first meeting.

After a scoreless first quarter, Evangel got on the board first with a 25-yard touchdown pass from Tyler Henderson to Coleby Henderson on fourth-and-7. The extra point was good for the 7-0 lead with 9:06 to play in the second quarter. That score held entering halftime.

Evangel’s defense produced three red zone stops in the first half with a pass break up by Nate Arvizu at the 1, a Will Ferrell interception at the 19 and then a Kamden Smith pick at the 18 in the final minute of the second quarter.

“Our defensive line, the pressure we put on the quarterback, was the difference in the ballgame,” Tim Smith said. “It was a great win for us. We bounced back (from the Hooper loss). We needed to make a statement tonight because we hadn’t played good.”

Tyler Henderson exited the game at the half due to injury, finishing with 60 yards on 5-of-12 passing. Fifty of those yards went to his brother, Coleby, giving him more than 660 yards receiving this season.

Cornerstone received the kickoff to open the second half and marched down field to score on a 34-yard touchdown pass from Garrett to Ben Perryman. Jace Bailey added the point after kick to tie the game, 7-7, with 9:31 to play. Garrett finished the night 15-of-30 passing for 255 yards, including 74 yards on three Perryman catches. Jacob Foster was the Chargers’ leading receiver with 107 yards.

With Tyler Henderson sidelined, Kamden Smith took over at quarterback in the third quarter and never stepped off the field.

“He’s oak tree tough,” said Tim Smith. “I told him at halftime, we’re about to put this game on your shoulders. We’re going to win or lose with us riding your back.”

With 4:06 to play in the third quarter, Kamden Smith punched in the go-ahead touchdown on third-and-goal from the 2. He finished the game with 121 yards rushing on 22 carries, 19 of which came in the second half.

“I definitely felt a little bit of the weight, but as one of the seniors on the team it was my responsibility to carry the team,” Kamden Smith said. “All of the hard fought yards were for Coach Smith and for the Lord.”

Turnovers or penalties plagued both teams through the night. Prior to the eventual winning touchdown, Evangel had a 65-yard touchdown run by Ferrell called back due to a penalty. CCS also had its share of missed opportunities.

“Not taking anything from them, but we had opportunities to score and they did some things on defense we didn’t expect to see and they hadn’t done all year. We were close, but close don’t win,” said first-year CCS head coach James Lee. “I thought my guys played hard, we just came up on the short end. We’ll revamp and get ready for next week.”

Defensively Lane Bailey led CCS with 12 tackles and a sack, Patrick Howell had 10 tackles, Garrett had eight and Rhett Edmondson had seven.

Cornerstone (3-3) will return to AISA AA, Region 1 action next week to host Evangel-Montgomery for Homecoming on Oct. 6. Evangel (4-2, 2-0 ACSC) travels to Lighthouse Home School for its third 8-man conference game.

Vestavia shuts out Helena on Homecoming