Vestavia shuts out Helena on Homecoming 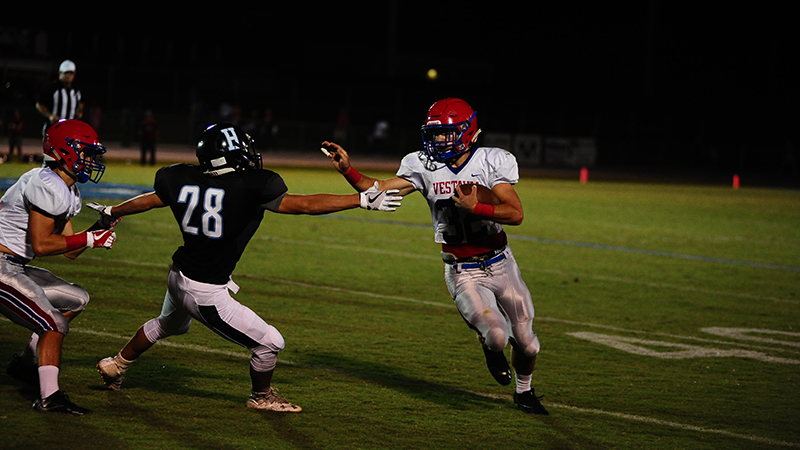 HELENA–The Vestavia defense made a few key goal line stands as well as an interception return for a touchdown to shut out Helena 14-0 as the Rebels spoiled Helena’s Homecoming on Sept. 29.

The game started sloppy for both teams as both the Rebels and Huskies were called for multiple penalties.

Neither offense could move the chains as the yellow flags continued to pile up and the score remained 0-0 at the end of the first quarter.

The Vestavia offense finally got the ball moving to start the second quarter as starting quarterback Coleman Petway led a 9-play 61-yard drive with 8:18 to go until halftime.

The Rebels moved the ball inside Helena’s 10-yard line when William Schaffeld took a halfback toss around left end and scored the first points of the game on a 6-yard touchdown run as Vestavia took a 7-0 lead.

With only a few minutes until halftime, the Helena offense attempted to drive down the field to get points before half. Huskies starting quarterback Lawson Peoples dropped back to pass and threw to the outside where Vestavia’s Luke Denney jumped in front of the pass and intercepted it and ran it back 52 yards for a touchdown. With 1:31 left before halftime, Vestavia had all the momentum and led 14-0.

“That was big, that was a big play for us,” Vestavia head coach Buddy Anderson said after the game. “We kept getting penalties when we were moving the ball and it was very frustrating, but I was glad we came out on top. Our defense played great on the goal line and we had three goal line stands. One in the first half and two in the second half.”

Helena had another opportunity for points near the end of the half as backup quarterback Luke Stamba threw a long pass to Helena wide receiver Justin Stuckey at Vestavia’s 6-yard line with 9 seconds left.

The Huskies took a couple shots to the end zone with the final pass falling incomplete as the goal line stand kept Vestavia’s lead at 14.

Neither offense could get the ball moving in the third quarter as the score remained 14-0 as each team had several 3-and-outs.

Helena had another opportunity to cut Vestavia’s lead in half early in the fourth quarter as the Huskies had a first and goal at the Rebels’ 2-yard line.

The Vestavia defense stood tall and stopped Helena on four consecutive plays as the Huskies’ turned the ball over on downs with 9:44 to go in the game.

The Rebels rushing attack shaved several minutes off the clock but Helena had another opportunity to score near the end of the game and possibly try for an onside kick if they could get a touchdown.

The Huskies moved the ball inside the Vestavia 20-yard line but that’s as far as they would get as Vestavia forced another turnover on downs with 2 minutes left in the game to preserve the win.

With the loss, Helena fell to 1-4 on the season and will travel to Opelika on Friday, Oct. 6, for a region game.