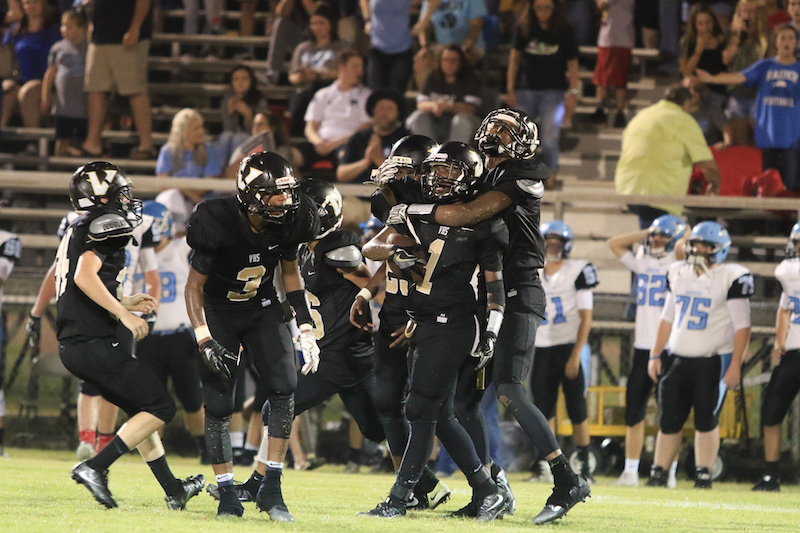 Vincent is now 3-2 on the season after winning back-to-back games for the first time since 2014 on Friday, Sept. 29, when they took down Sumiton Christian 41-20. (File)

VINCENT – The Vincent Yellow Jackets have won back-to-back games and are 3-2 to start the season for the first time since 2014 after they took down Sumiton Christian 41-20 on Friday, Sept. 29, in front of a home crowd for their second straight win.

The 41 points scored also marked the most the Yellow Jackets have scored since week three of that same 2014 season. After a 38-7 win over Fayetteville and a 14-13 win over Pleasant Valley to start the season, this team has seen a lot of confidence instilled in them.

It’s a feeling this team hasn’t had in three years after winning just one game in the last two years combined coming into the season, but now the Yellow Jackets sit at 3-2 overall and 1-2 in region play.

For the second week in a row, Vincent picked up the win with a strong ground game. Last week it was 297 rushing yards, while this week they gained almost 100yards more, running for 381 yards.

The bulk of that yardage came from Chris Hardie, who accounted for 213 rushing yards and four touchdowns for the Yellow Jackets on the night. He had rushing touchdowns of 18 yards, 44 yards, 17 yards and one yard throughout the game.

Vincent struck first behind Hardie’s first big run of the night as he took it in from 18 yards out to put the Yellow Jackets up 7-0 with 6:15 left in the first quarter.

Sumiton Christian was able to answer on its ensuing drive and tied the game up at 7-7 very quickly in less than three minutes. It didn’t take long at all for Vincent to strike again, as Hardie picked up his longest touchdown run of the night on the Yellow Jackets’ ensuing possession.

He went 44 yards to give Vincent the answer as they took the lead back at 14-7 with 2:41 remaining in the opening quarter.

This is when the Yellow Jackets switched into a different gear and scored 27-unanswered points over the next two-and-a-half quarters as they took a whopping 41-13 lead with 10:21 remaining in the game.

Sumiton Christian added one more touchdown late in the contest, but it wasn’t nearly enough as they fell 41-20.

The Eagles are now 3-2 on the season, but sit at 2-1 in region 7 play, which is the important thing.

With an 0-5 Woodland next week, a 2-3 Horshoe Bend the week after, a 2-3 Reeltown the week after that and a 3-2 Ranburne four weeks from now; Vincent has no reason to not feel like they can reel off three, maybe for more wins in a row with the level of confidence they are playing with at the moment.