PELHAM – Thousands of people came out to the opening night of the Alabama Fair at the Oak Mountain Amphitheater on Friday, Sept. 29. According to fair promoter Jack Daniels, the fair will last until Oct. 8 and features eight free attractions in addition to carnival rides, boardwalk games and vendors.

“You can come in without having to go on a ride and still have a night of food and entertainment,” Daniels said.

Daniels said the “attention to having a family friendly atmosphere” is part of what attracts so many families to the fair.

“Because we emphasize a lot of kids rides and family friendly events, this is the perfect place to bring your little one,” Daniels said.

According to Daniels, the fair includes two circuses: The Royal Hanneford Circus and the World of Wonders, both of which are free.

“Normally, you have to pay extra to go to the circus, but the circus’s price is included with the fair,” Royal Hanneford Ringmaster Ben Ramey said. “The circus is a big attraction because you get to come in and relax and watch the show. I hope they enjoy the performances from all over the globe.”

“It’s just like an enormous back-end of shows,” World of Wonders sword swallower Tommy Breen said. “You really do get that fair feeling. There’s the circus over there, here’s the other show and you have the ferris wheel spinning in the background.”

Breen described the World of Wonders show as “a hodgepodge of weirdness,” with 10 live acts including a sword swallower, a fire eater and a knife thrower.

Daniels said this is the first time his company, EventOps, has hosted a fair in Shelby County and up to 50,000 people are expected to attend while it is in town.

“There have been other fairs here, but this is the first time we’ve had an event in Pelham,” Daniels said.

Daniels thanked Shelby County, the city of Pelham and Oak Mountain Amphitheater staff, who he said were very encouraging and accommodating of the Alabama Fair.

Hoover resident Austin Amerson, who came to the fair with his wife, Amanda, said the fair seemed like a fun activity for a date and looked forward to trying the fair food.

“We wanted to do something different,” Amerson said. “So far, we’re pretty happy. We watch the show, ‘Carnival Eats,’ so we’re getting the different carnival food and seeing what they’ve got.”

Montevallo resident Nick Hoard said going to a local fair has been a long-standing tradition for his family.

“We love the fair. I grew up going to the fair, so we try to go every year. It gets the kids outside, active, walking around and not in front of video games. More than anything, it allows us to all do something as a family,” Hoard said. “I get to watch all three of my kids laugh and have fun. For me, it’s about watching my kids have a good time.” 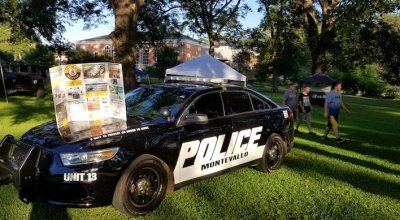