ALABASTER – A 37-year-old Alabaster man is facing up to 20 years in prison after he was arrested and charged with burglarizing and setting fire to an Alabaster residence in late September. 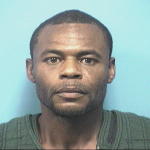 The Alabaster Police Department arrested Elijah Clayton III, who lists an address on Dilcy Daniel Drive in Alabaster, on Sept. 29 and charged him with felony counts of second-degree arson, third-degree burglary and unlawful possession of a controlled substance and a misdemeanor count of resisting arrest.

According to his arrest warrants, Clayton broke into a home on Fourth Place Northeast in Alabaster on Sept. 29 “with the intent to commit … theft of property.”

While at the residence, Clayton allegedly started a fire “with intent to damage” the structure, and was allegedly found to be in possession of crack cocaine when he was arrested.

He was combative with officers when he was taken into custody, according to his warrants.

As of Oct. 2, Clayton did not yet have a preliminary hearing date set in Shelby County District Court.

By ALEC ETHEREDGE | Sports Editor GARDENDALE – After a hard-fought 41-28 loss at Gardendale on Friday, Sept. 29, the... read more