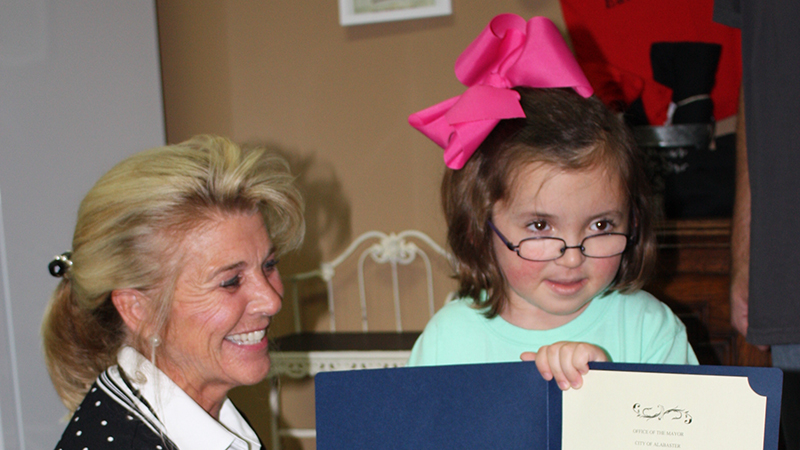 Waldrip attends Creek View Elementary school, and has received an outpouring of support from her classmates, teachers, and community. (Contributed)

ALABASTER – Members of the Alabaster community have been rallying around a 7-year-old Creek View Elementary student battling a rare condition.

Anna Kate Waldrip was born with a Chiari Malformation, a condition where the brain sits too far down on the spine and causes problems with circulation of spinal fluid.

“She is such a sweet, fun, and loving little girl,” said Jenny Watts, a volunteer working to help raise funds for Waldrip’s medical expenses. “The ultimate goal is to make sure she has a normal life, and can be a productive citizen of the community. She is very loved by so many. She just glows with happiness.”

Waldrip is the daughter of Todd and Tracy Waldrip.

A fundraiser was held Sept. 12 at Lazy Boy BBQ from 4:30 to 8 p.m., where individuals could eat at the restaurant and have a certain percentage of the proceeds go toward a fund to help with medical expenses for Waldrip’s family.

More than 150 people showed up to the fundraiser and roughly $2,500 was raised. T-shirts are also being sold with the phrase “AK Strong,” and a fund has been set up at Wells Fargo in Alabaster for anyone wishing to donate.

“It was wonderful to see so many people come out and support Anna Kate,” Watts said. “I know it meant so much to her family.”

Alabaster Mayor Marty Handlon presented Waldrip with a proclamation making Sept. 12 Anna Kate Waldrip Day, in honor of Chiari Malformation Awareness Month, which is during the month of September.

A surgery scheduled for Sept. 18-19 in Nashville at Vanderbilt’s Children’s Hospital, involved doctors shaving off vertebrae C1 and C2 from Waldrip’s spine.

“This will in turn make her neck very unstable so she will be put into halo traction,” according to a press release about Waldrip’s condition. “The second part of the surgery involves decompressing the Chiari from the back of the neck. She will then have two ribs removed to use for fusion of her neck. She will have a fusion of her skull and neck with plates, rods, screws, and rib bones.”

Watts said Waldrip’s surgeries were successful, but the road to recovery will be extensive.

She will be home-bound for school for the next several months while she recovers, according to Watts.

“We want her to know that she is very loved in this community,” Watts said. “As word keeps spreading, it is amazing to see the outpouring of support from people that don’t even know her, but they want to help.”

Anyone wanting to purchase an “AK Strong” T-shirt can contact Watts by email at jennywatts@bellsouth.net.