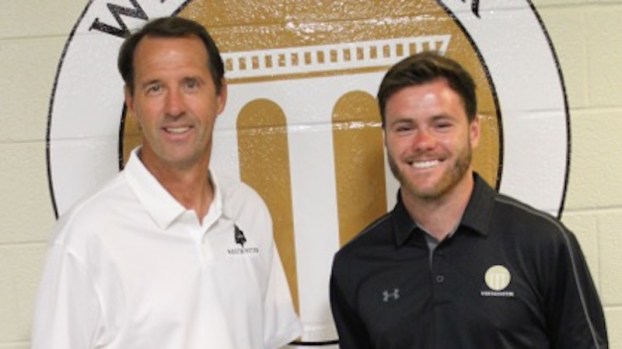 Westminster’s new girls coach Ken Headley, left, and boys coach Christian Adkins will look for strong seasons as they take over a storied Knights’ program that tends to be one of the best soccer schools in the state. (Contributed)

NORTH SHELBY – The Westminster School at Oak Mountain has announced the hiring of two new soccer coaches to take over after the departure of former head coach Patrick Fitzgerald, who coached both the boys and girls teams. The school announced Ken Headley has taken over the girls’ program, while Christian Adkins will be the new boys’ coach when they take the field in 2018.

Headley has attained a USSF “B” license and holds an NSCAA Advanced National Goalkeeping Diploma. He recently returned to the Vestavia Hills Soccer Club after three years as head coach at Judson College, where his team finished in the top 15 all three years and the top ten in two of those three years.

Since arriving at VHSC in 2005, he has coached both girls and boys Division I and Division II teams. In addition to coaching at VHSC, Headley has been the varsity assistant and goalkeeping coach at Spain Park High School for the last six years.

To give him more to juggle, Headley is also the head coach of the Samford men’s club team, which he was a member of before graduating from the University. Headley not only spent time on the club team, but the Bulldogs’ NCAA team as well, playing goalkeeper for both teams.

Over the years his players have been recruited to the SEC, Conference USA, Great South, Southern Collegiate Conference, SWAC and Appalachian Athletic Conference. Headley and his wife Lynn have a son Josh, who played soccer with VHSC and currently attends Mississippi State.

The name Christian Adkins may sound very familiar to you and for good reason. Adkins was named our very own Shelby County Player of the year by former sports editor Wesley Hallman in 2012 after a stellar season that ended with him as the captain of a state championship team.

After playing three seasons with the Eagles, Adkins earned a scholarship to play soccer at the University of West Alabama, where he went on to win the conference tournament twice, regular season championship once and also made an appearance in the NCAA tournament.

After college he had the opportunity to extend his playing career with the Birmingham Hammers in the National Premier Soccer League. Adkins earned a bachelor’s degree in history from UWA and is currently completing a master’s degree in education from UWA as well.

Since graduating, Adkins has been working at Oak Mountain High School as the assistant coach to the boys varsity team and head coach of the junior varsity squad. During his tenure at Oak Mountain High School, the boys’ team won two class 7A state championships and a national championship. Like Headley, Adkins is also currently coaching club soccer for Vestavia Hills Soccer Club.

By ALEC ETHEREDGE | Sports Editor HOOVER – The cross country season is now in full swing after several of... read more