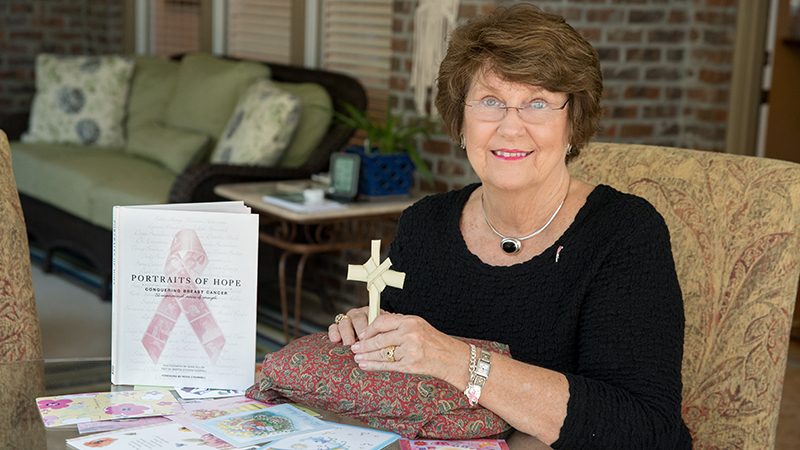 Jane Galik leaned on the support she received from family and friends while going through treatment. From the cross made by a family member on Palm Sunday, the Portraits of Hope book she received from her granddaughter, Ashlee Elliott, letters and cards from church members to the pillow she received from The Joyful Stitchers at First Baptist Church in Alabaster, the support and love she received helped Jane every step of the way. (Reporter Photo/Keith McCoy)

When Jane Galik turned 40, she routinely got a mammogram check each year.

“I was adopted, and at the time frame I was adopted there were no medical records that were passed on so I have never had a family history,” Galik, of Alabaster, said. “Due to not knowing if individuals in my family had a history of breast cancer, getting a mammogram each year was something very important to me.”

It was during a routine mammogram at the end of 2008 that caused concern for doctors who encouraged Galik to come back for a follow-up appointment.

“I got a letter in the mail asking me to come back in for a second mammogram,” Galik said. “I knew that sometimes they have difficulty reading the X-rays so I went back in somewhat alarmed, but not totally concerned at that point. It was shortly after the follow-up when they discovered that I had breast cancer.”

“What was interesting is the day I found out I had breast cancer was the day after I had a separate major surgery,” Galik said. “It was unrelated, but the day after the major surgery I received the results of my biopsy and they told me I had breast cancer. That time was very difficult for me because it seemingly all hit me at once. I was unable to receive treatments until I completely healed from my other surgery.”

Galik’s cancer had not progressed, and was caught during the very early stages, which she credits to her radiologist.

“I am incredibly thankful to the radiologist for being able to catch it so early,” Galik said. “I had to have a lumpectomy [a surgery in which the tumor and some surrounding tissue is removed], and did not have to have my breast removed, which is something I am very thankful for.”

In addition to her lumpectomy, Galik had to undergo 25 treatments of radiation.

“My husband worked 100-percent on the road at the time so he was never home,” Galik said. “I knew I was going to have to take myself to radiation for five weeks and they wanted to send me to downtown Birmingham, but I requested they allow me to go to Shelby Baptist Medical Center because it was close to my home.”

Doctors worked with Galik and allowed her to receive the radiation treatments at Shelby Baptist.

“You lose a lot of energy when you have to undergo the treatments,” Galik said. “It sounds strange, but a lot of times I would go to my radiation treatments and I would be sitting in this big room with all of this medical equipment, and I would just be praying and thanking God that I was able to have this technology to help me in my fight with cancer.”

In 2009, Galik was declared cancer free, and still routinely has tests and visits with her doctor to stay up-to-date with the status of her health.

Now, 72, Galik works to encourage other women, including friends, family, and strangers, to have routine mammograms.

According to information provided by the American Cancer Society, women between the ages of 40 to 44 should begin an annual breast cancer screening with mammograms.

Women should also know how their breasts normally look and feel, and report any breast changes to a health care provider immediately.

“I was a very lucky person,” Galik said. “I thank God every day that I was blessed with a radiologist that saw the very early signs of cancer. When I was told I had cancer, there was no doubt in my mind that I would be moving forward to have treatments done.”

While Galik admits there were low and discouraging points throughout her journey, she credits her faith in God and support from family and friends for helping her along the way.

“It was not always easy, and it was during the difficult moments that I relied heavily on those around me,” Galik said. “All of those things played into how I got through the difficult times, and I consider myself extremely blessed.”