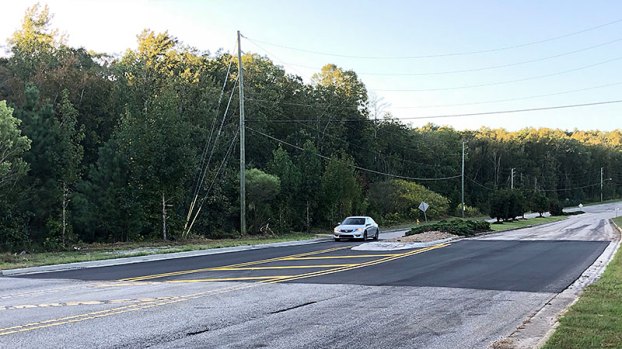 ALABASTER – The Southeastern Sealcoating company has finalized repairs on a portion of Alabaster Boulevard after allowing the original repairs to settle over the past couple of months.

Crews with the company closed the roadway for a day on Sept. 29 to mill the roadway to level it off, and install the final sealcoat on the asphalt.

In late July, the council approved a change order, through which the city agreed to pay Southeastern Sealcoating an additional $25,705. The additional expense allowed the company to add further improvements to the section of roadway to keep rain water from pooling in the travel lanes.

Although the roadway was reopened to traffic on July 26, the final portion of the repairs was not made until late September.

Alabaster Boulevard connects the Propst Promenade shopping center with the Weatherly and Ballantrae neighborhoods. The recently repaired section is slightly north of Candlewood Suites, where the landscaped center portion of the road ends.

Alabaster City Manager Brian Binzer previously said the few months between opening the roadway and making the final repairs gave the roadway time to settle before the project was finalized.

By EMILY REED / Special to the Reporter ALABASTER – Members of the Alabaster community have been rallying around a 7-year-old Creek... read more