Birmingham Bulls season is near 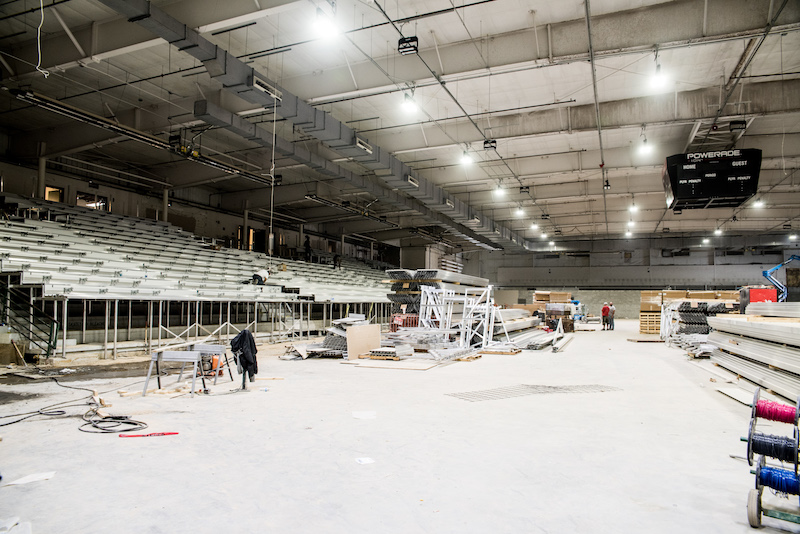 Renovations are being done to the Pelham Civic Center's main rink to make fit a professional atmosphere. Theatre style seating will surround the ice and seats will go all the way to the glass in a bowl type style. (Reporter photo/Keith McCoy)

PELHAM – After an absence of 17 years, the Birmingham Bulls are ready to take to the ice again as the team is less than three weeks away from beginning its 2017-18 campaign on Oct. 21 at the Mississippi RiverKings and less than a month away from its first home game against the Knoxville Ice Bears on Nov. 3.

“There’s definitely a lot of enthusiasm around, we just need to capitalize on it and make sure we deliver what the fans want,” General Partner Art Clarkson said of the quickly approaching season. “The only big shot in the sports business is the guy that buys the ticket to the event. That’s the only big shot I know.”

A lot of fans were baffled when the team relocated in 2000 after eight successful years that Clarkson said saw 6,000 people at the BJCC on week-night games and closer to 7-10,000 fans on Friday’s and Saturdays.

While it took a while for the team to return, the time off has built an excitement level for many that can’t wait for the Bulls to hit the ice again, this time at a newly renovated Pelham Civic Complex.

“I went to the civic center (BJCC) first and they didn’t want any part of me,” Clarkson said. “As it’s turned out, being out here in Pelham with the city government and mayor Gary Waters; they’ve done nothing but give us 100 percent support, which has made for a great situation for the hockey team and the city of Pelham. We are going to be able to serve the greater Birmingham area the way it deserves.”

Clarkson said several times that the timing is absolutely perfect for the Bulls return for three reasons.

“Number one, it’s been 17 years since we had the Bulls and people desperately want it back,” he said. “Number two, the city of Pelham stepping up. Two years ago probably wasn’t the right time for either party, but now is the right time. And number three, the Predators have brought the conscious of professional hockey down here.”

What Clarkson is speaking of is the Nashville Predators run to the Stanley Cup Finals that took the sports and hockey world by storm last May. Not only did the Preds play great hockey, but their fans were deemed as some of the best in sports, while cheering for a hockey program in the south.

“They said ‘hey look, we’re in the south, but we’re one of the best teams in the NHL,’” Clarkson said. “If any sport can go anywhere, it’s the NHL and our goal is to bring that atmosphere to this city.”

While Clarkson knows the anticipation of hockey is already high enough in the city, he knows he has to do all he can to bring awareness to the program and get people as excited as possible.

“We’re not assuming anybody is going to show up,” Clarkson said. “That’s my premise. So we’re going to have to not only play hockey, but market this team.”

One way Clarkson has gone about selling the hockey program is through planned game promotions that get, to say the least, a little bizarre, but will create a lot of buzz surrounding the program.

Besides youth and adult jersey night, two other promotions in particular stand out. On Friday, Dec. 15, the Bulls will have “Sharknado Night” where 1,000 shark hats will be given out to kids 12 and under and the team will wear jerseys with images of sharknado’s from the infamous movie on them.

And on Saturday, Feb. 3, a week before the 2018 Winter Olympics, the team will host “Miracle on Ice” night, in which the Bulls will be wearing the USA jerseys and their opponents, the Fayetteville Marksmen, have agreed to wear Russian jerseys. Jerseys worn in both of those promotional games will also be auctioned off.

“My philosophy is, you don’t promote for opening night, you promote until the last game of the season so you can start building some momentum,” Clarkson said. “You give people a reason to come out to the game and say ‘what am I missing?’”

Another way the Bulls are driving up excitement is by completely renovating their new home, the Pelham Civic Complex. PCC is undergoing a $1.8 million fix up that will first and foremost include 2,000 additional seats. 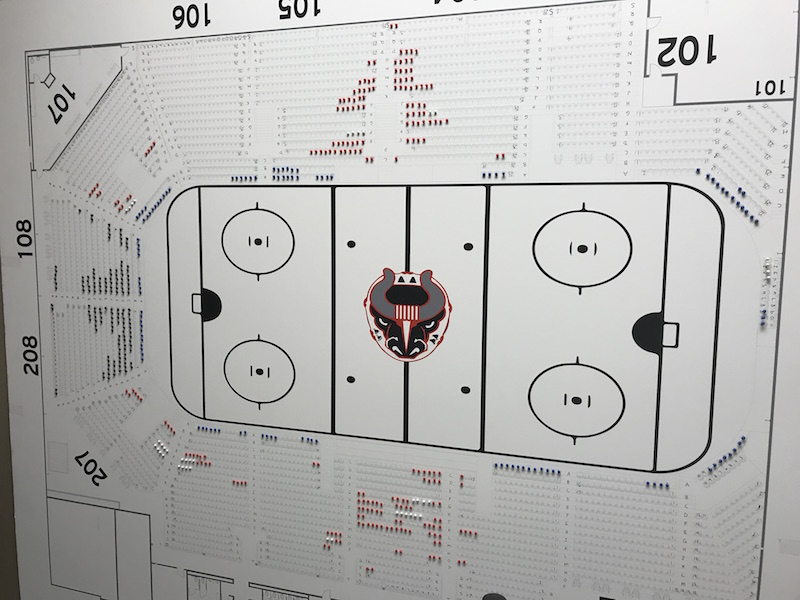 Previously the arena had bench style seating that ran parallel to the ice. With the renovation, it will be a complete bowl that surrounds the entire rink with seats going right up to the glass for a total of 5,000 theatre style seats.

Also part of the renovation will be a new scoreboard that resembles a smaller version of the massive scoreboard in AT&T Stadium in Dallas, Texas.

“The key is to be fan friendly,” Clarkson said. “We are basically going from a rec rink to a professionally rink, so our mindset has to change to suit a professional style hockey rink.”

Here is a computer generated look at the finished arena.

Another exciting aspect that has created a level of excitement is the addition of Eli Gold to the broadcast team. Clarkson and Gold have known each other since 1975 when they met in Norfolk Virginia and will now do what they can to promote the Birmingham Bulls together.

The team, which will be led by former player Jamie Hicks, will report to the complex on Sunday, Oct. 8, and will start practice that week of Oct. 9, before playing an exhibition game shortly after and starting the season on Oct. 21.

The Bulls are part of the Southern Professional Hockey League and will compete against Pensacola, Evansville, Mississippi, Peoria, Knoxville, Macon, Roanoke, Fayetteville and Huntsville, with an emphasis placed on Huntsville.

“Believe me, that’s going to be an intense rivalry,” Clarkson said.

Birmingham will host Huntsville in its second home game of the season on Friday, Nov. 10 at 7 p.m.

Season tickets and special ticket packs are available now by calling 205-620-6870. You can also visit Bullshockey.net for more information regarding  the team.