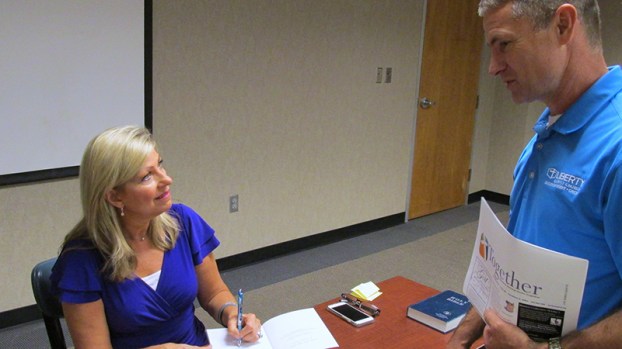 Pastors come together at SBA meeting

ALABASTER – Television news anchor Brenda Ladun reminded her audience on Oct. 3 that it had been a tough week.

“My nephew was actually at Mandalay Bay [in Las Vegas], but he came home Sunday night, fortunately,” she said.

Ladun spoke to the monthly meeting of the Shelby Baptist Association’s pastors at Shelby Baptist Hospital, and talked about the bad news she sees as anchor of ABC 33/40 television in Birmingham.

“There’s a battle going on for good and evil, and we saw it this week,” she said. “In the last 20 years, it’s gotten so much worse. This is bad news I really hate to report on. And the news has gotten so opinionated these days. We used to just report the facts and let the people decide.”

Ladun told of her admiration as a little girl for an aunt who was a missionary.

“I thought I’d grow up and be like Aunt Kate who was a missionary in Africa,” Ladun said. “She said she was willing to walk past snakes and whatever else from village to village to tell people about Jesus.”

Ladun said she committed her life to Christ at age 18 and vowed she’d be willing to go wherever God wanted. Then she began a career in media.

“In 2001 I had the conviction that I might need to revisit this idea about missions,” she said, “even though I was married and had three sons. But one month later the doctor told me I had cancer. My first thought was ‘how long do I have to live?’ Then I remembered my mother’s counsel to give everything to God, so this is what I tried to do.”

Ladun said she had the task of explaining her diagnosis to her children, and felt ill-at-ease about it. Then she saw a verse on her son’s wall from his Upward Bound basketball league: “Trust in the Lord with all your heart, lean not on your own understanding. In all your ways acknowledge him and he will direct your paths.”

“God showed up in that room, and I prayed that he would wrap his arms around my children even if I couldn’t be there,” she said. “What if I didn’t make it to Christmas, or Mother’s Day? Is there one person on earth we can turn to in order to fix things? I told them God would always be there for them even if I couldn’t.”

Ladun said she tried to slip in quietly to St. Vincent’s Hospital in Birmingham for her initial surgery. Her pastor was there and prayed with her.

“The nurse told me to put all my jewelry in a bag, so I began to feel like a prisoner,” she said with a laugh. “And the gown she told me to put on had to be designed by a man—it was wrinkled and ugly!”

Ladun said she visited another dark place where she had to remove all her jewelry–a Florida prison when she was a cub reporter. She was surprised to meet inmates of faith who were praying in the prison chapel.

“There was hope and grace in that awful place, and I’ve always remembered this lesson,” she said. “Nehemiah 8:10 became real to me: ‘The joy of the Lord is my strength.’

Ladun told of her work at Grace House, helping young girls to find new hope in their lives.

“Every single person in your church needs to know that they’re of value to God,” she said. “Their gifts and abilities can give life to other people who are discouraged.”

Ladun said her pastor preached a sermon on encouragement and insisted the word actually means “to give courage to another.”

“Everybody needs encouragement at some point,” she said. “There are so many lonely people. They’re there and they need you. Don’t be afraid to ask anyone you see to come to church with you and hear about hope and light. Tell them that God loves you and God loves them, too.”

Ladun said she’d had multiple surgeries in the past several years.

“My mission is not to go to Africa,” she said. “But God has given me a new ministry to encourage others and to remind them to take care of themselves. Early detection is the key to survival from cancer. One in eight will get breast cancer. But cancer’s not just for women. I just lost a friend to melanoma, or skin cancer. Help me encourage others to take care of themselves.”

An anonymous donor from Siluria Baptist Church provided copies of Ladun’s book, “Encouraged,” for every pastor at the meeting.

“This gentleman wanted all of you to be encouraged,” said Michael Brooks, Siluria pastor and president of the pastors’ conference.

By NEAL WAGNER / Managing Editor Blue Cross and Blue Shield of Alabama is warning locals to be wary of fraudulent... read more