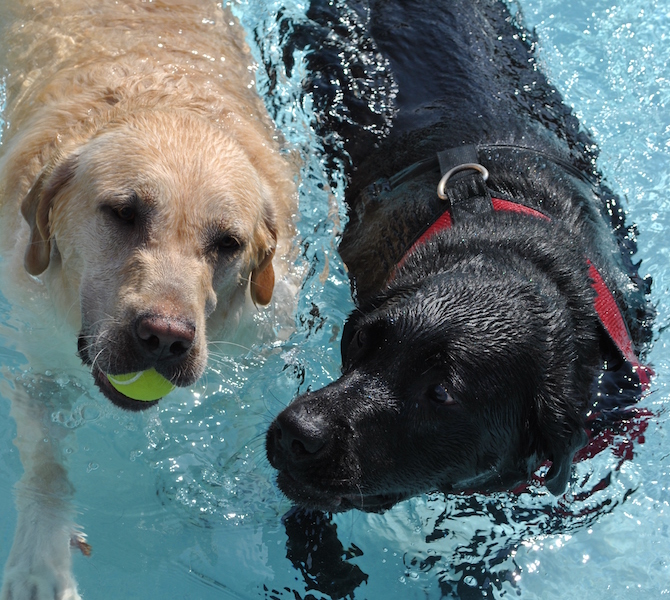 About 75 dogs took a dip in the Pelham YMCA’s outdoor pool during three sessions on Saturday, Sept. 30. (Contributed)

PELHAM – Dogs and dog lovers throughout the county had the opportunity to get their paws wet at the Pelham YMCA’s Doggy Dip Day event on Saturday, Sept. 30. During Doggy Dip Day, dog owners were able to take their dogs swimming in the YMCA’s outdoor pool throughout the day.

According to aquatics director Leah Turner, who originally came up with the idea for the event, this is the first time the Pelham YMCA has ever held an event like this.

Turner said the first event was a success and attracted large crowds of dog owners and others who simply wanted to watch. Many YMCA staff members told turner that Doggy Dip Day was their favorite day at work. The event was open to both members and non-members.

“A lot of people appreciated an event for their pets,” Turner said. “It was an event that brought a lot of smiles to people.”

“It brought in a big crowd, even people who didn’t have dogs came,” Turner added. “We were actually worried about traffic accidents (near the entrance) because people were stopping their cars on the hill to look.”

“We had big dogs and little dogs. It was a really good mix,” Turner said. “All of the dogs were well behaved. We didn’t have any problems.”

Because of the high turnout of the first Doggy Dip Day, Turner said she plans to host it in the future.

“I want it to be a yearly thing at the end of the summer,” Turner said.

While many people have asked about a similar event for cats, Turner said she believes it would best if they were kept out of the pool.

“They’re probably not going to swim, but I’ll come up with something for them,” Turner said.