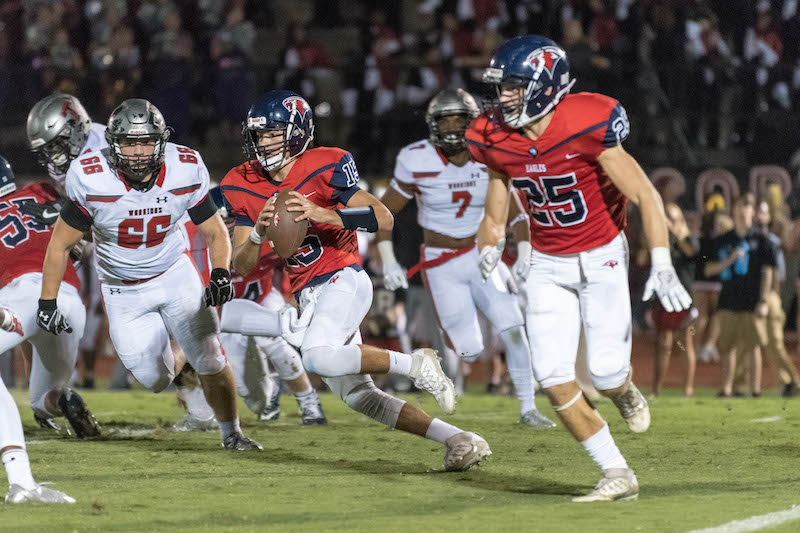 Oak Mountain will take part in our Game of the Week when they travel to the Hoover Met this Friday night for a matchup with Class 7A, Region 3 foe Hoover.

The midway point of the 2017 high school football season has already come and gone, hard to believe, isn’t it? This past week we got a break from region play and had some big storylines, such as Briarwood and Thompson staying undefeated.

That being said every team had a break from region play. This week that all changes as all of our teams dive back in to region play besides Calera and Chelsea, who have a bye week. We’re headed down the home stretch of the season as these next three or four games will determine each team’s playoff destiny.

Oak Mountain at Hoover (Game of the Week)

Oak Mountain will be looking for a first when the Eagles travel to the Hoover Met this Friday night to take on the Hoover Buccaneers in a 7A, Region 3 matchup. The Eagles are 0-14 all time, with their closest contest being a 17-14 loss in 2015.

Both teams are coming off of bye weeks, which was probably more useful for Oak Mountain having lost back-to-back games prior after a 3-0 start to the season.

The Eagles still have a strong defense and the right style offense that could keep this game close. They’ll have to keep a Hoover offense that’s scoring 37.8 points per game and put up 63 in its last outing off the field.

Oak Mountain lost this game 49-6 a year ago, but with the number of upperclassmen on the team this year, it shouldn’t be quite as bad in 2017. That being said, if the Eagles fail to control the clock it could get out of hand quickly. Oak Mountain 17 Hoover 35

If the season ended now, it would already be a historic one for the Thompson Warriors. Off to their first 5-0 start since 1989 and averaging 44.8 points per game, this Warriors’ squad is making a name for its self in 2017.

Thompson gets a Vestavia team that has won three in row, two of which were shutouts against Oak Mountain and Helena. The Rebels defense is the strong suit of this team, giving up just 13.4 points per game. Match that with Thompson’s offense and something has to give.

My personal thought is that Thompson’s offense is better than Vestavia’s defense and the Rebels are only scoring 13.2 points per game. That will be the difference maker as they struggle to keep pace. Thompson 38 Vestavia 14

Similar to Oak Mountain, Spain Park is coming off of a much needed bye week after losing back-to-back heartbreakers. One a 27-24 loss to Hoover in the final minutes, and another a 51-50 double-overtime loss to Mountain Brook.

The Jags are still very much in the playoff hunt, and shouldn’t finish any lower than fourth. This week they get a Huffman team that has lost its two region games to Oak Mountain and Vestavia by a combined 63-12.

This will be another week for the Jaguars to get some work and forget about the heartbreak as Thompson awaits in a crucial showdown the week after. Spain Park 42 Huffman 10

Helena had its chances against 7A Vestavia last week, but fell 14-0 as the Huskies record is now 1-4. They do have a tough resume so far this season, already having played two 7A, Region 3 teams in Vestavia and Mountain Brook and a ranked 6A team in Homewood.

This week it gets no easier as they take on Opelika team that should be a heavy favorite. If the Huskies play like they did last Friday, they’ll keep it close, but the Bulldogs are the better squad. Helena 10 Opelika 28

Pelham has a team this year that can compete against Wetumpka. Having lost two games by seven points in the final minutes, they could easily be 5-1 right now. What the Panthers can’t let happen, is have the 51-21 loss to Thompson affect them moving forward.

The Indians are 6-0 and considered the No. 5 team in Class 6A in large part because they’re putting up 47.7 points per game. Pelham will keep it close for a while, but their offense will eventually run out of steam. Pelham 24 Wetumpka 35

This matchup looked a lot bigger a week ago before St. Clair County lost its first game of the season. Still though, this is a big game for both teams in terms of region play.

Should Briarwood lose, St. Clair County would be in the driver’s seat for the region championship. With that said, the Lions are the No. 1 team for a reason. They’re only giving up 8.8 points per game and are improving offensively every week. Briarwood 35 St. Clair County 17

This week and the week after against Pleasant Grove mark the two biggest games of the season for Shelby County if the Wildcats want a shot at the playoffs.

It starts this week with Fairfield, who beat Shelby County 44-14 last year. This year it could go either way, but I think the Tigers will sneak out a close one. Shelby County 21 Fairfield 28

The Bulldogs are coming off two straight losses and have fallen in three of their last four games. It’s not because they’re a bad team, but are being forced to play a lot of young players due to injury. The schedule the rest of the way will be the difficult part and it starts this week with Greene County. Montevallo 21 Greene County 31

Vincent continues improving each week and has now won back-to-back games to improve to 3-2. This week, that win streak will continue to three games as the Yellow Jackets take on a winless 0-5 Woodland team that’s giving up 39 points per game and scoring just 7.4 Vincent 35 Woodland 10