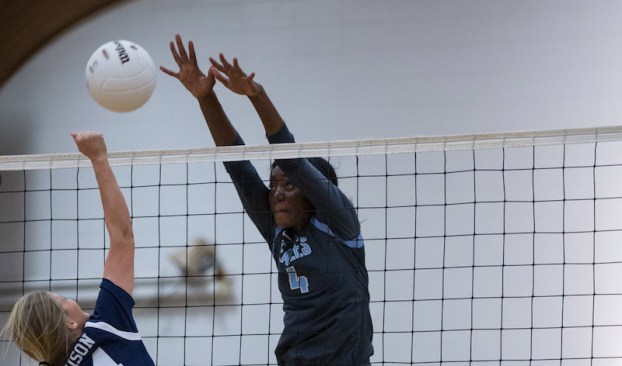 A Calera player goes up for the block in the win over Jemison as the Eagles were able to take the match in straight sets. (For the Reporter/Brandon Sumrall)

JEMISON – The Calera Lady Eagles varsity volleyball team made it two in a row over the Jemison Lady Panthers on Thursday night in a straight sets victory 25-11, 25-9, 25-18.

The first set of the match started competitively until the Eagles took over serving duties nursing a two-point lead when a pair of consecutive aces grew that lead to four at 6-2.

The four-point Calera lead was cut to two by the Panthers before Calera took over serving duties and picked up four aces to lead a 7-0 Eagles run to make the score 16-8.

Jemison cut the lead by one before Calera took over serving duties again and went on an 8-0 run to end set one with a 25-11.

Set number two of the match was all Calera as the Eagles got the set started with a 6-0 run to jump in front 6-1. Another run shortly after gave the Eagles six more points, which put them way out in front 13-2.

Jemison senior Camille Hague picked up two points for the Panthers, but that was answered quickly by two points from Calera.

The nine-point lead continued growing when the Eagles went back on serve and were able to pick up a pair of aces during a 7-0 run that gave Calera a 25-9 second-set win.

Set three started much the way set one did as the teams battled through a 4-4 tie before a kill by Calera turned the momentum around and gave the Eagles the serve. They were able to take advantage and jump out to a 7-4 lead.

The three-point lead remained intact until Calera served up three consecutive aces that gave the Eagles a six-point lead. With Calera leading 20-13, a pair of aces made the score 22-13, which was all they needed to put the match away.

Shortly after, the Eagles faced a match point leading 24-18, before a kill sealed the deal with a 25-18 set win to take the match in straight sets, 3-0.

Hague lead the Panthers with 6 kills and an ace while Carolina Foote picked up 3 kills.

By ALEC ETHEREDGE | Sports Editor NORTH SHELBY – A battle of two of the best volleyball teams in their... read more