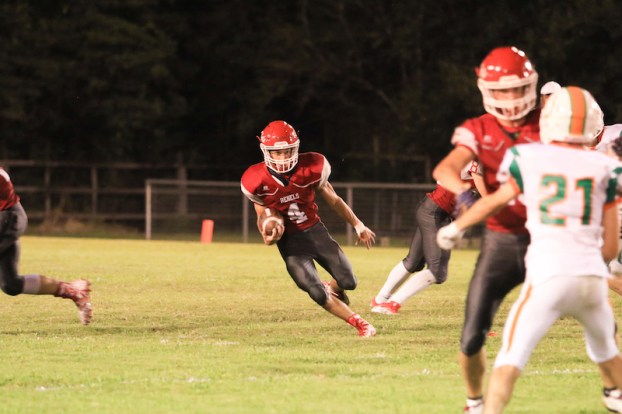 Lew Dale had a great rushing performance for the Rebels in the win miraculous last-second win. (File)

HARPERSVILLE – Trailing 32-28 with just a few seconds on the clock, Coosa Valley sat on the Kingwood 45-yard line in a big region and county showdown. Rebels’ quarterback Caleb Allen took the snap and heaved the ball to the end zone where it was tipped by two defenders back at the goal line before falling into Chase Carlee’s hands for a game-winning touchdown.

Chaos ensued after the 45-yard touchdown pass gave Coosa Valley a 34-32 win over Kingwood for the Rebels first region win of the season, which they needed to have any hope of making the playoffs.

“Tonight showed that they don’t quit,” Coosa Valley head coach Dane Reece said after the game. “They gave everything they had until the last second. It was a complete effort until the very end, which is what I preached all week leading up to the game.”

The exciting ending started 30 seconds earlier, however, when the Lions took a 32-28 lead with just 30 seconds remaining in what looked like their game to lose.

A win would have given Kingwood its second region win of the season and all but a shoe in to the playoffs. Instead, the Rebels were able to pick up a lengthy kickoff return and a penalty by the Lions tacked on even more yards to put Coosa Valley in business.

While the Rebels’ chances looked slip, the fought to the end and were able to pick up a miracle as well as their first region win of the season. The win moved Coosa Valley to 3-5 overall and possibly one win away from clinching a playoff berth.

“I told them before the game tonight ‘If you leave everything out on the field, you’ll be happy with the result,’ and it was crazy how that worked out tonight, but it showed because they fought until the very last second,” Reece said.

Allen threw for 125 yards and three touchdowns in the win, while Carley had a total of 115 yards and two touchdowns, as the duo had strong games from the start to the very last second.

Carlee was also able to pick up two fumble recoveries and a pick six on the defensive side of the ball to complete an unbelievable and memorable night for the senior.

“One thig we talked about a lot this week is not necessarily worrying about self-accomplishments, but buying into the team picture,” Reece said. “He (Carlee) took that by the horn and led not just on the field but by example. He led us physically and emotionally tonight.”

Lew Dale, who has been the leading playmaker offensively all season, also had a nice game rushing for 160 yards.

It’s a sight for sore eyes as Coosa Valley had struggled most of the season offensively only putting gup more than seven points once, but the last two weeks have put up back-to-back 20-plus point performances.

“We’re starting to get into a routine offensively and key players are stepping up to help the last two weeks,” Reece said. “Pieces are falling into place.”

The Rebels now have a chance to clinch a playoff berth this next week when they take on Evangel Montgomery, who is 0-7 after a 60-20 loss to Cornerstone, which bodes well for the Rebels.

“I honestly think this will get us rolling moving forward,” Reece said. “We just need to keep capitalizing on key moments and can’t shoot ourselves in the foot with turnovers or penalties.”

Defensively Dale had six tackles and a blocked extra point, while Mason Houston and Stone Dorough ended the night with 12 and 10 tackles, respectively, including two sacks from Dorough.

By GRAHAM BROOKS / Staff Writer OPELIKA–The Helena Huskies knew a tall task was ahead when it hit the road... read more