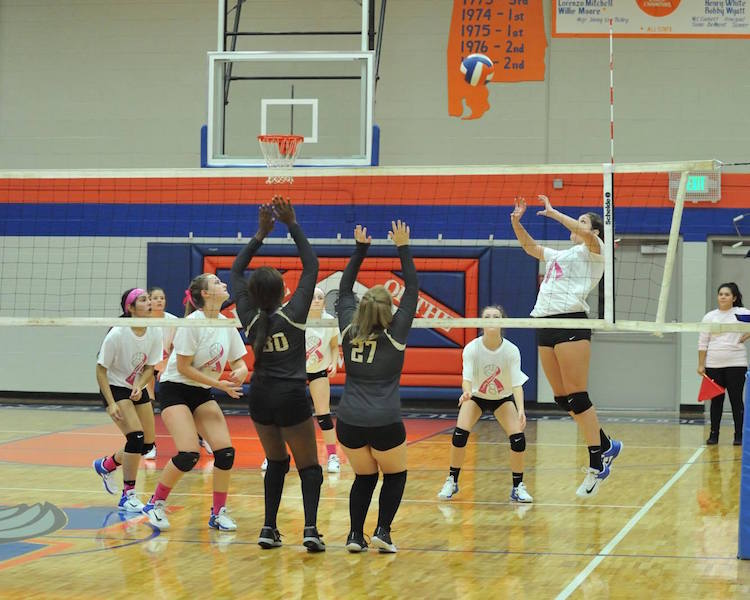 Montevallo and Vincent teamed up to battle cancer on Thursday, Oct. 5, when they honored former Vincent coach Melinda Claiborne. (For the Reporter/Larry Dancy)

MONTEVALLO – It was a special night at Montevallo High School on Thursday, Oct. 5, not solely because of the volleyball match taking place between the Bulldogs and the Vincent Yellow Jackets, but the cause that each team stood for before the game.

As most know, October marks Cancer Awareness Month, and both of these teams got in on the action for a special reason. Melinda Claiborne, the former volleyball coach at Vincent, had a long battle with brain cancer and both teams recognized her before the contest began.

She fought as hard as possible defeating brain cancer once, and despite the cancer returning and her passing away on Sept. 29, Claiborne didn’t lose the fight as she still continues to have an impact, not just in her community, but across the county as Montevallo honored her and everybody battling cancer.

In her career, Claiborne taught at Thompson High School, Columbiana Middle School and Vincent Middle High School before retiring in August of 2017.

Montevallo ended up winning the match between the two schools in straight sets 25-16, 25-6 and 25-11, but that seemed to be the furthest thing from anybody’s mind on the night.

The Bulldogs had already planned a ceremony to honor those fighting cancer before Claiborne passed away, but the ceremony became much more emotional and meaningful after the day of Sept. 29.

Before starting their matches against one another, Montevallo’s junior varsity and varsity teams lined up on one side of the gym, while Vincent’s lined up on the other side. Each player from Montevallo’s team walked across the gym with a yellow rose in hand.

Each player eventually met face-to-face with a Vincent player on the opposite end and handed them a yellow rose in remembrance of their former coach, then proceeded to give a heartfelt hug before the two teams stood together in a moment of silence.

While Claiborne will no longer be coaching her girls on the court or teaching a classroom full of kids, her impact on this county and beyond will continue to live on.