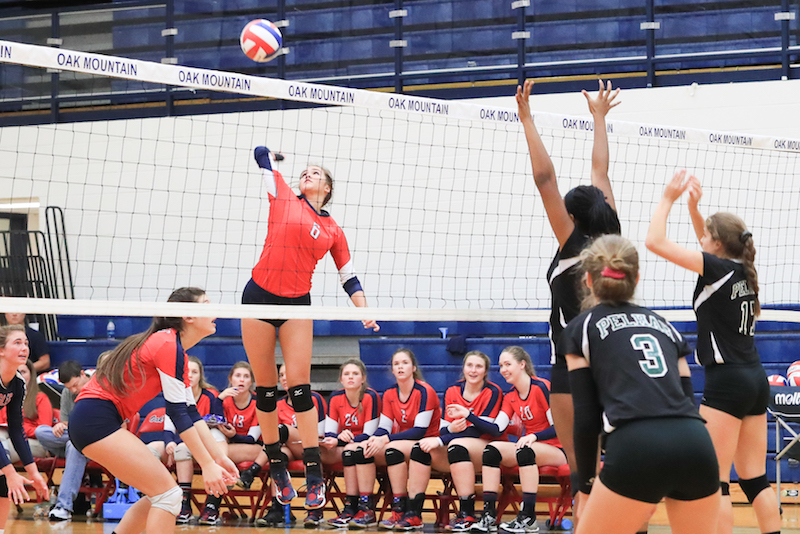 The 7A No. 3 Oak Mountain Eagles were able to pick up a big 3-0 victory over 6A No. 5 Pelham Panthers on Thursday, Oct. 5. (For the Reporter/Dawn Harrison)

NORTH SHELBY – A battle of two of the best volleyball teams in their respective classification took place at Oak Mountain High School on Thursday, Oct. 5, when the 6A No. 5 Pelham Panthers traveled to square off with the 7A No. 3 Eagles.

While Pelham (24-7) battled in the match, Oak Mountain (32-4) proved why it is considered one of the best teams in the state. After sewing up the regular season area championship earlier in the week, which means they get to host the area tournament, the Eagles came right back and picked up a 3-0 win over the Panthers.

Oak Mountain jumped out to an early 5-1 lead in the first set, before Pelham finally started putting together some points. Neither team, however, was able to hold serve.

Things went back and forth over the next few points, before the Panthers took their largest lead of the first set at 17-15. The Eagles responded with five consecutive points to steal momentum back and grab a 20-17 lead. They eventually went up 24-23 in a tightly contested set before winning set point to take the first set 25-23.

Oak Mountain took advantage of the momentum it had gathered at the end of the first set and came out on fire to start the second jumping out to an 11-4 lead.

Pelham was able to chip away at the lead by winning three points in a row on two different occasions, but never got closer than a three-point 23-20 deficit before the Eagles picked up a 25-20 win to take a 2-0 set lead.

The Panthers were led by seniors Emorie Long and Jamila Wilson with eight kills apiece. Georgia Stonicher led the team with three aces from the serving line, while Grace Nolen had a team-high 15 digs. Wilson, Stonicher and Ashley Anderson all had seven digs to finish second.

Oak Mountain has two regular season games and one tournament left before hosting the area tournament on Oct. 23.