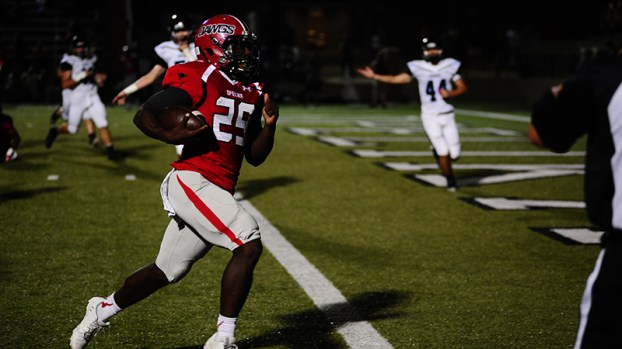 Opelika running back Brantan Barnett finished with 161 yards and a touchdown in the Bulldogs 42-14 win over Helena on Friday, Oct. 6. (Reporter Photo/Graham Brooks)

OPELIKA–The Helena Huskies knew a tall task was ahead when it hit the road to travel to Opelika on Friday, Oct. 6, for a tough regional game and unfortunately for Helena, the Bulldogs had too many big plays as Opelika cruised to a 42-14 homecoming win.

Helena would grab the momentum early however as the Huskies put up a big scoring drive to start the game.

From Opelika’s 15-yard line, Peoples delivered a strike to Stuckey for a 15-yard touchdown to put the Huskies up 7-0 halfway through the first quarter.

The momentum would be short lived however as the Bulldogs offense had an answer.

Opelika quarterback Brody Davis helped lead the Bulldogs down the field quickly and tossed a 13-yard touchdown pass to Conner Smith for a touchdown to tie the game 7-7 at the end of the first quarter.

This would be the first of 42 unanswered points for Opelika, as Davis finished the night with 230 passing yards and three touchdowns.

The Bulldogs next touchdown would come early in the second quarter as Opelika wide receiver Malik Wilson punched it in from fourth-and-goal from the 1-yard in the wildcat formation to go up 14-7.

A few minutes later, Davis aired out a deep ball to wide receiver CJ Jordan for a 57-yard touchdown to make it 21-7 Opelika.

Helena’s offense couldn’t duplicate the success it had in the opening drive of the game, as Opelika buckled down to force numerous punts and stalled drives the rest of the way.

“Our defense has been playing lights out and we have Jamias Presley who wasn’t in there tonight and he’s like the quarterback of the defense,” Opelika head coach Caleb Ross said. “I don’t know how much that had an affect on that first drive, I’ve got to watch the tape but our defense settled in after that and played really good. Our offense responded and that’s what we needed. We needed to take a drive right back down and score and we did that. It gave us confidence that we could do some things in the passing game, running the football and we hit some of our RPO stuff.”

Opelika would put another touchdown on the board before the half, but this time on the ground.

Bulldogs’ running back Brantan Barnett had a big night as he finished with 161 yards rushing. Forty-six of those yards came on a long touchdown run to put Opelika up 28-7 before halftime.

The deficit would be too much to overcome for Helena as Opelika added two more touchdowns in the second half in the blowout win.

Helena had one more offensive highlight in the second half when backup quarterback Luke Stamba tossed a nice touchdown pass to wide receiver Dionte Tolbert to make it 42-14 late in the fourth quarter.

With the loss, Helena fell to 1-5 on the season and 1-2 in region play. The Huskies schedule does not get any easier as they will travel to take on undefeated Wetumpka on Friday, Oct. 13.