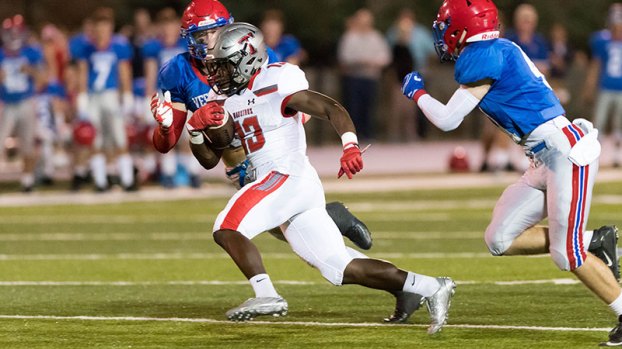 Thompson’s Shad Byrd runs for a first down during the Warriors’ 45-14 victory over the Vestavia Hills Rebels on Oct. 6. (Reporter Photo/Neal Wagner)

VESTAVIA HILLS – Thompson quarterback Taulia Tagovailoa threw for 318 yards and ran for a pair of touchdowns to help the Warriors take down Vestavia 45-14 on Oct. 6 and remain perfect six games into the season – A height THS has not reached since 1988.

“I was proud of our guys. I think they did a great job,” Freeman added. “We’re getting better, and it sounds like coach talk, but we’ve got some areas we’ve got to get better at.”

Receivers Ahmad Edwards and Michael Pettway both recorded touchdowns in the effort, and caught seven passes for 127 yards and one pass for 75 yards, respectively to help Thompson (6-0, 4-0) end the night with 454 total yards of offense.

After the Rebels (3-3, 2-2) intercepted Tagovailoa deep in Warrior territory on Thompson’s next series, a roughing-the-kicker penalty against Thompson on a 27-yard Vestavia field goal attempt gave the Rebels a fresh set of downs. One play later, Vestavia’s William Schaffeld scored on a four-yard run to cut the Warriors’ lead to 14-7.

Thompson responded and took a 21-7 halftime lead when Tagovailoa scored his first rushing touchdown of the night on a five-yard keeper.

The Warriors scored on back-to-back series in the third quarter: once on a 75-yard pass from Tagovailoa to Pettway and again on a 19-yard scramble by Tagovailoa.

Thompson kicker McGuire drilled a 49-yard field goal through the uprights to start the fourth quarter, and Joseph Ford added another THS touchdown on a 15-yard run on Thompson’s next series.

The Warriors will be on the road again on Oct. 13, as the team will travel to Spain Park to take on the region foe Jaguars.