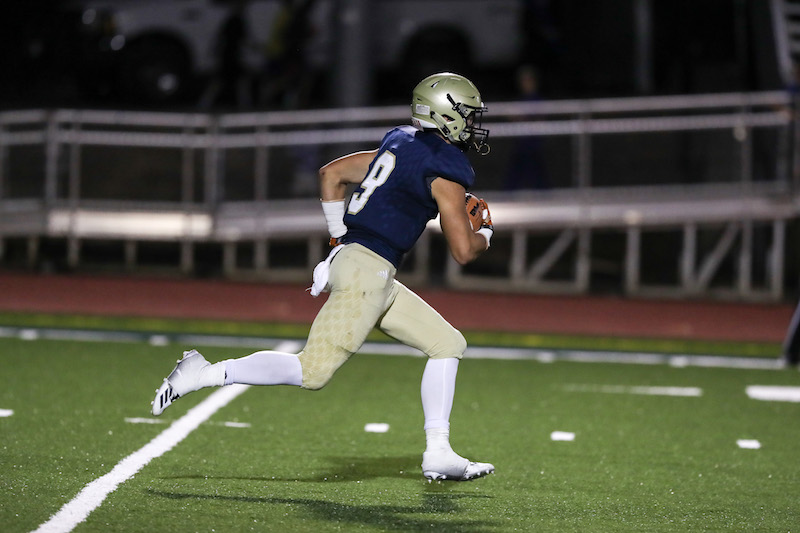 NORTH SHELBY – Briarwood Christian School’s football team found a way to defeat a gritty St. Clair County squad, 31-6, on Friday, Oct. 6, when the Lions were not at their best, perhaps showing why Briarwood is ranked No. 1 in Class 5A.

For coach Fred Yancey, the game also showed that the Lions (6-0 overall and 4-0 in Class 5A, Region 5 play) have some work to do.

“We’re not clicking yet,” Yancey said. “Confidence isn’t their problem, it’s being consistent.”

Briarwood outgained St. Clair County 434 yards to 252 yards, but three turnovers and 11 penalties for 70 yards allowed the Saints to hang around.

The teams traded punts throughout the first quarter, and a sack by Briarwood’s Dalton Brooks on fourth down on his team’s 24-yard line stopped the first scoring threat of the game.

Briarwood fumbled the ball back to St. Clair County (4-2, 3-1), but this time Carson Kolb sacked the Saints’ quarterback to force another turnover on downs, on Briarwood’s 30-yard line.

The Lions promptly turned the ball over again, on an interception.

The rest of the game followed this theme, with neither team able to establish consistent execution offensively, as they combined for five turnovers on downs.

“Both teams were kind of handing each other the game,” Yancey said. “I probably could list every mistake a team could make, and that’s what we were doing wrong.

“It was a matter of just hammering away, and at some point something good was going to break.”

JR Tran-Reno scored the first of his four touchdowns of the game with 5:38 remaining in the first half, as he took a short pass from Michael Hiers, made one defender miss and outraced the rest to the end zone for a 63-yard score, with Noah Nall adding the point-after.

With time running out in the second quarter, Hiers lofted a deep pass down the middle of the field and found Carson Eddy for a 48-yard gain to St. Clair’s 1-yard line, where Tran-Reno would punch it in after lining up under center.

The visiting Saints got on the board on their first possession of the second half and were set to get the ball back after a defensive stop, but a short punt hit off the helmet of a St. Clair player and was scooped up by Briarwood’s Carson Donnelly to give new life to the drive.

The Lions did not waste the opportunity, as Tran-Reno scored from one yard out with 1:23 left in the third quarter for a 21-6 lead.

Nall’s 24-yard field goal early in the fourth quarter made it 24-6, and any doubt that remained about the outcome of the game was erased with Tran-Reno dashed 70 yards for a touchdown with 6:31 to play.