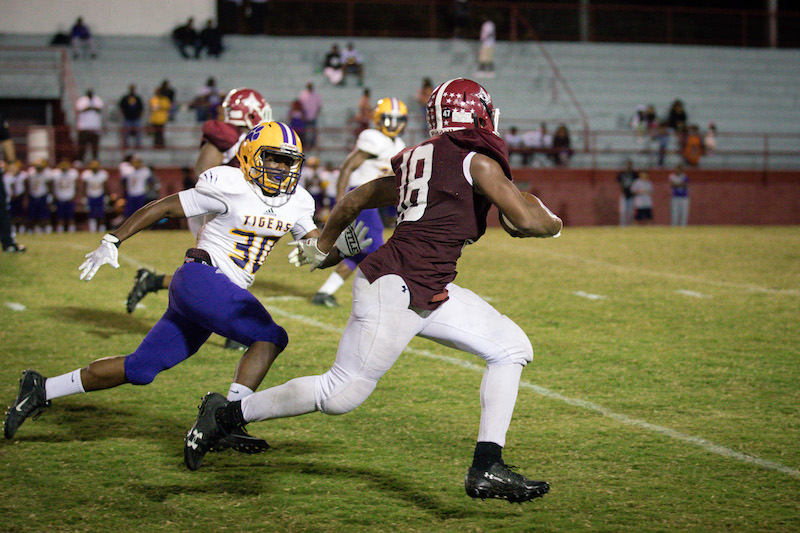 Lamont Bush continued his spectacular season with a strong rushing performance against Fairfield, but the Wildcats fell short in an important region game. (For the Reporter/Adam Lee)

COLUMBIANA – Football is a game of inches, but it’s also a game of bounces. This was never more evident than on Fairfield’s first big play of the game as a long pass from quarterback Malachi Holt-Bennett’s bounced off a Wildcat defender and into the waiting hands of his receiver Myron Monroe.

Those big plays and a string of fumbles doomed the Shelby County Wildcats as they fell at home to the Fairfield Tigers (3-3, 2-2 Class 5A Region 5) by a score of 30-6.

The Wildcats’ fumbles led to instant offense for Fairfield in more ways than one. Nevada Wages’ first of two fumbles came on SCHS’s first drive just as they waded into Tiger territory.

The ball squirted loose and was scooped up by Fairfield’s Damon Miller who returned it 55 yards to put the Tigers up 12-0 less than four minutes into the game. Fairfield went on to score touchdowns after all three of Shelby County’s fumbles.

The Wildcats were never able to get their signature run game in rhythm as Fairfield swarmed the line of scrimmage much of the first half.

In fact, the Wildcat offense didn’t reach the opponent’s red zone until 1:36 to go in the third quarter. Shelby County was able to pile up 259 yards on the ground, but only ten passing yards.

Senior running back Lamont Bush was the lone bright spot racking up most of his 117 yards in the second half on just 15 carries. SCHS cut the Fairfield lead to 18-6 with their first touchdown of the night 26 seconds into the 4th quarter, but the Tigers struck back just two plays later with 59-yard bomb from Holt-Bennett to Myron Monroe–their third touchdown hookup of the evening.

The third and final fumble on the ensuing drive came after the Wildcats drove deep into Fairfield territory, but again Tiger quarterback Malachi Holt-Bennett connected on an 88-yard heave to Christian Smith three plays later to seal the game.

The loss drops Shelby County (3-3, 1-3 Class 5A Region 5) into a tie for sixth in the region with four games remaining. The Wildcats can still make the postseason, but they’ll likely have to win out to do so.

The Wildcats will get their next chance in region play when they host Pleasant Grove Spartans at Wildcat Stadium next Friday, October 13th at 7 p.m.