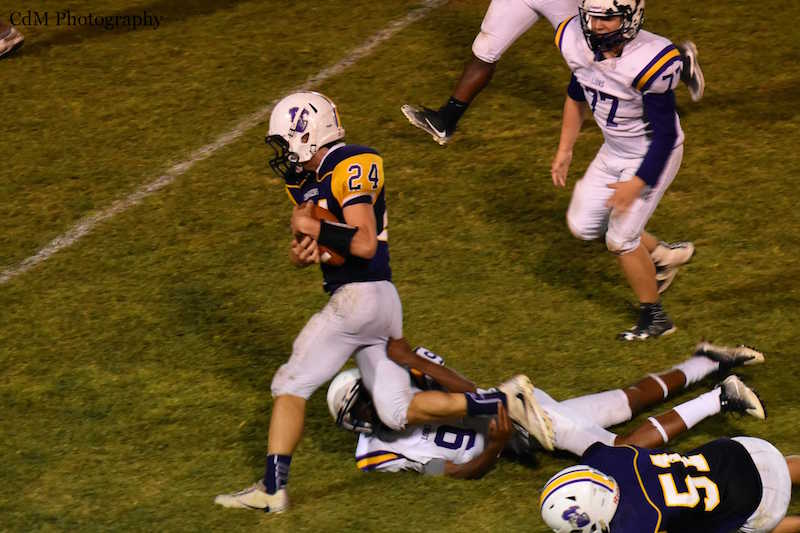 COLUMBIANA – The Cornerstone Christian Chargers were able to bounce back quickly from their heartbreaking 14-7 loss in a battle with Evangel Christian School in Alabaster last week by picking up a dominating 60-20 win over another Evangel team on Friday, Oct. 6, as they beat Evangel-Montgomery on homecoming night.

“Our guys were possibly more excited for this week than last week with it being homecoming and a big region game,” Chargers’ head coach James Lee said after the important win. “They did a good job of getting ready and executing tonight.”

The victory moved Cornerstone to 4-3 overall, but more importantly 2-1 in region play. While they didn’t clinch a playoff berth by my calculations, they mine as well have with what would have to happen to keep them out.

With Kingwood sitting at 1-2, they would have to win out with their two toughest games left, while the Chargers would have to lose out in order to miss the playoffs.

Cornerstone came out a bit sluggish according to their head coach as they only held a 26-14 lead at the half, which Lee contributed to the possible homecoming atmosphere.

After a talk with the team at halftime, Lee got his guys ready for the second half and they came out firing both offensively and defensively.

The Chargers went on to outscore Evangel 40-6 in the half behind a dominating performance on both sides of the ball.

“We got our minds right in the second half,” Lee said. “I gave them a good chat at the break and was very pleased with how they responded and turned things around.”

It was in large part due to the ground game in which the Chargers picked up 323 total yard. They were led by Jake Blankenship, who continues to put up some impressive numbers as he picked up 200 yards rushing and four touchdowns.

“We ran the football very well, which we didn’t have last week, so that was a big difference in tonight’s game,” Lee said.

As impressive as the offense was, the defense continued its improvement. After giving up 34.5 points per game in the first four games of the season, the Chargers have given up just 15.3 in their last three contests.

Lane Bailey led the way with seven tackles, while Jessup lodge and Ben Perryman each had had six and Rhett Edmondson had five.

“I think we’re getting back to how we played last year,” Lee said of the defense. “I think we had like 25 or 26 interceptions last year. We have guys getting greedy and wanting to get to the football. They’re just really buying into what we are doing as coaches.

“We’re starting to play the way we’re supposed to play which is play good defense and put up a lot of points.”

Lee also had praise for Mason Richards, who played well at safety picking up an interception and paved the way blocking for the run game.

I challenged the offensive line tonight and they paved the way for the offense tonight. Center Austin Matzke and Landon Guy, both stepped up and opened some holes, especially in the second half. They were key to our offensive success tonight.

On Friday, Oct. 13, Cornerstone gets a good Macon-East team that is 3-0 in region play and 6-1 overall after five consecutive wins.

“That’s going to be a high scoring matchup, but if we can play defense the way we have the last couple of weeks we’ll have a good shot,” Lee said.