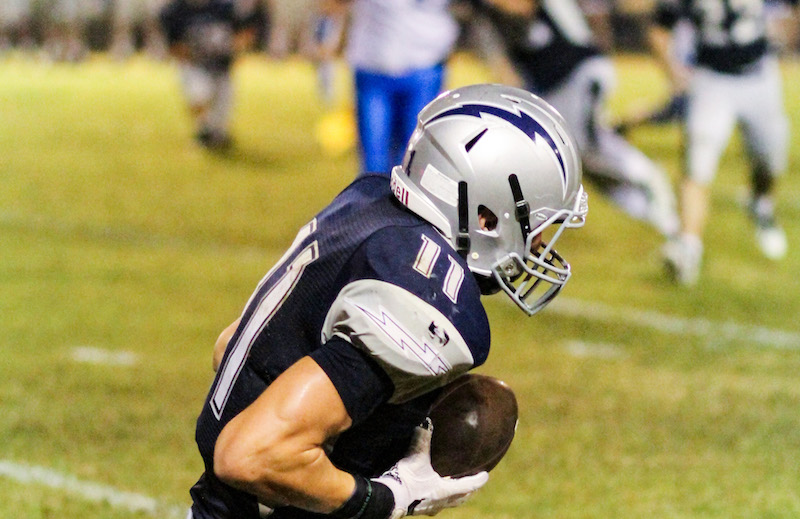 “One thing about 8-man, it’s never over, and the lead is never big enough,” said Evangel Coach Tim Smith. “The kids fought until the very end. I told them don’t quit, keep playing and they did.”

Similar to the previous week’s second half at Cornerstone, Evangel relied on the legs of senior Kamden Smith to shoulder the load. Kamden Smith rushed 36 times for 244 yards and had 80 yards on 4-of-16 passing to lead the Lightning’s offense. He scored five rushing touchdowns and threw a touchdown pass.

Lighthouse took an early 12-0 lead through the first quarter. Evangel got on the board on the first play of the second quarter with a 16-yard touchdown pass from Kamden Smith to Coleby Henderson. Carter Hand’s extra point made it 12-7.

The two teams traded scores through the remainder of the half with Will Ferrell and Kamden Smith finding the end zone for Evangel. Smith also ran in a bad snap on the extra point for a 2-point conversion to make it 24-22 with less than a minute to play in the second quarter. Lighthouse closed the first half up, 30-22, scoring on the final play of the half with one second left. On the first play out of the break, the Warriors made it 36-22 with a 65-yard touchdown pass.

Will Ferrell answered with a 65-yard run to make it 36-29 after Hand’s PAT. Ferrell finished the night 132 yards and two touchdowns on seven carries. Henderson then picked off a Lighthouse pass and returned it for a touchdown. The PAT try was blocked, keeping it a one-point game, 36-35.

Lighthouse responded with a pair of touchdowns to extend its lead to 48-35, but Evangel quickly answered again with two touchdowns to take the lead, 49-48, with 27 seconds remaining in the third quarter.

Coach Smith said the second half change came from figuring out how to run an 8-man double wing and power set, a result which wore down the Warriors.

“I found something we could do, and I’m so hard-headed I couldn’t get out of it,” Coach Smith said. “We rode that ole No. 4 horse in Kamden Smith … We lined up in a power set and said here we come, stop us if you can.”

Less than a minute into the fourth quarter, Kamden Smith was back in the end zone, followed by a 2-point pass to Ferrell to give Evangel a 57-48 lead. The Lightning added another Smith touchdown and 2-point conversion to go up by 17 points, 64-48, with 5:39 to play.

While Lighthouse added one more score, 64-55, a Theo Mangos interception helped the Lightning run out the clock.

Cooper Vowell was Kamden Smith’s largest passing target in the game, collecting 60 yards on two catches – not counting a touchdown called back for a hold. It was one of two touchdowns called back in the game, as Henderson had a punt return for a TD negated.

On defense, John Lloyd recorded 12 tackles and two sacks, Nate Arvizu had nine tackles, Mangos had eight tackles and a sack. Will Parker had a fumble recovery.

Evangel travels to Marengo Academy in Linden for a Thursday night game on Oct. 12 before returning home for Homecoming on Oct. 20 and an 8-man game against Lyman Ward Millitary Academy at the ECS Complex.