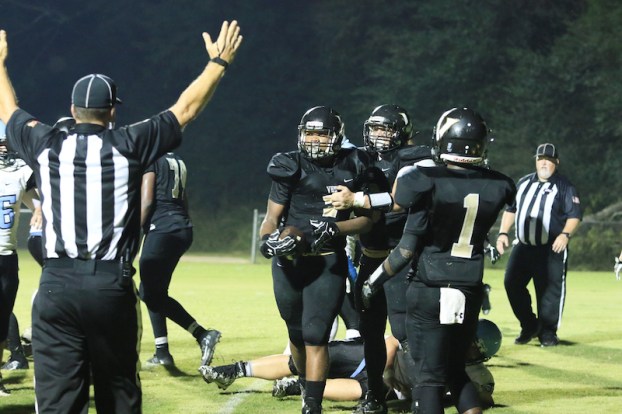 WOODLAND – For the third week in a row, and fourth time this season, Vincent head football coach Wiley McKeller expects he’ll wake up on Saturday with toilet paper in his front yard – what appears to be becoming a new tradition for each Yellow Jackets win.

“I’ll gladly do it every time, if we keep winning,” said McKeller about cleaning up the TP, which has been known to even cover his porch rails.

On Friday, Oct. 6, Vincent not only beat Class 2A, Region 5 opponent Woodland, 34-7, but recorded its first road win of the season and first three-game win streak since 2014.

“We are still a work in progress. The kids are playing with a lot of confidence and improving weekly,” McKeller said.

Vincent produced nearly 600 yards of total offense in the win, with 384 yards on the ground and 210 yards on 9-of-13 passing from quarterback Dusty Davis.

“Dusty Davis continues to mature and get better as a QB. He threw some really impressive balls tonight,” McKeller said. “The opener to Zavien Kelley sucked the wind out of them early. Pretty play by both those guys.”

Late in the first quarter, the Chris Hardie Show began with a 58-yard touchdown run to stretch Vincent’s lead, 14-0.

A 32-yard field goal by Woodland was blocked, but Woodland found the end zone early in the second quarter to cut the margin in half, 14-7.

Hardie struck again with a 62-yard TD run and Davis added a late first-half touchdown pass to Kaleb Wilson from 72 yards out to give Vincent a 27-7 halftime lead. Hardie scored his third touchdown of the night, this time from 11-yards, in the third quarter to round out the scoring, 34-7. The junior running back finished the game with 255 yards rushing on 20 carries.

“Hardie and the O-Line continue to impress. The O-Line believes he is going to score, and he believes they are gonna open it up. It’s definitely the relationship you want to see as a coach,” McKeller said.

Kelley had 103 yards receiving on four catches, while Wilson had 87 yards on three receptions and 66 yards rushing. Zach Munoz made 4-of-5 extra points.

By ALEC ETHEREDGE | Sports Editor MONTEVALLO – It was a special night at Montevallo High School on Thursday, Oct.... read more