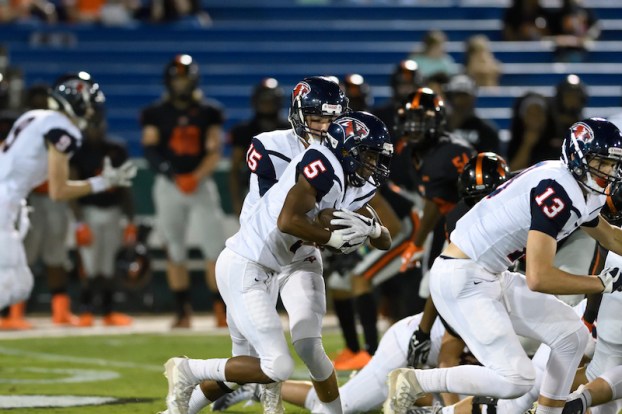 Oak Mountain's Jonathan Bennett takes the handoff during the Eagles' loss to Hoover on Friday night. (For the Reporter/Barry Clemmons)

HOOVER – The Oak Mountain Eagles had to take to the field without two of their most productive offensive players as Ethan Duncan and Luke Percer, who were the top two rushers coming into the season, were both held out due to injuries.

It cost the Eagles (3-3, 1-3 Class 7A, Region 3) a 59-7 loss to Hoover as they were unable to move the ball up the field for the majority of the night as they couldn’t get any momentum with the ground game.

Hoover also showed its prominence as the No. 2 team in the 7A classification, by dominating on both the offensive and defensive line as they moved to 5-1 overall and 4-0 in the daunting 7A, Region 3.

The Bucs were able to do so by tallying 375 yards of total offense behind senior running back Larry McCammon, who ended the night by running for 112 yards on just 11 carries.

The highlight for McCammon came on Hoover’s third drive of the night, which was also a huge momentum shift in the game.

Trailing 7-0, Oak Mountain pinned Hoover inside its own 1-yard line, making them have to go the length of the football field to score.

The Bucs were able to do just that as they went on a 99-yard drive that featured one third down conversion and one fourth down conversion before McCammon broke loose up the near sideline and started throwing defenders to the ground as he rumbled 21 yards to the end zone to put Hoover up 14-0.

“He’s just a great player and a guy that’s an every down back,” Hoover head coach Josh Niblett said after the game. “He’s a back after contact. He just runs so hard and is so explosive. You can watch him run when he doesn’t even have the ball and see that in him.”

It looked like the Eagles had another chance to gain some momentum shortly after when Hoover went on another long drive, but Jalen Parker’s pass was picked off in the end zone giving Oak Mountain the ball at its own 20-yard line.

Two-plays later, however, the Bucs were able to intercept the ball right back and take over at the Oak Mountain 21. It didn’t take long before they punched in a 4-yard touchdown to extend the lead to 21-0.

After an Eagles’ three-and-out, Hoover went on another quick drive that was capped off by McCammon’s second touchdown of the half, this time from 22 yards out as the Bucs grabbed a 28-0 lead.

Oak Mountain finally got on the board just before the half to cut the lead to 28-7 thanks to a 32-yard touchdown pass from Connor Webb to Carson Bobo, but Hoover answered quickly with a field goal to take a 31-7 lead at the break.

Coming out of the locker room nothing changed as Hoover kept its foot on the gas pedal the rest of the night outscoring the Eagles 28-0 in the second half to pick up the easy 59-7 win.

Sitting at 1-3 in region play, Oak Mountain has three must-win games in a row against Tuscaloosa County, Mountain Brook and Spain Park, the latter two on the road, if they want a shot at the playoffs.

Webb had 132 yards passing for one touchdown, while Bobo was his top target with 80 yards receiving and the lone touchdown.