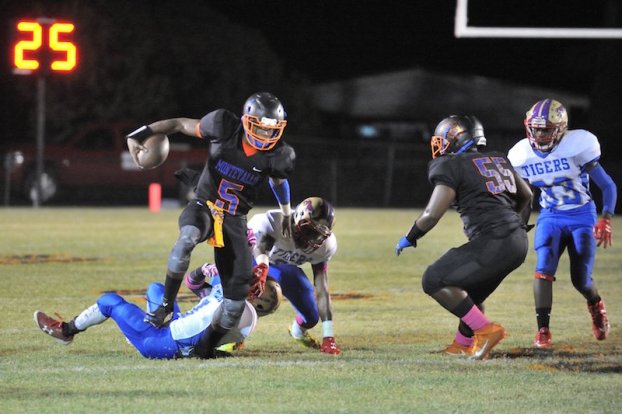 Montevallo's JaBrian Sullens escapes a defender during the game and runs up field. The Bulldogs, who are playing a lot of young guys, fell 42-20 in the game. (For the Reporter/Larry Dancy)

By KARL HUNT | For the Reporter

The game got off to a hot start as both teams scored on their opening possession.

The Tigers received the opening kick-off and drove the length of the field on a 10 play, 64-yard drive.  Greene County’s Jeremy Hutton took a handoff around the right side for an eight-yard touchdown run to give the Tigers an early 6-0 lead.

Montevallo took advantage of their opening drive to put points on the board.  Jay Sullens threw a 58-yard pass on the first play to set up a Montevallo touchdown.  Orlandis Weeks rushed the ball up the middle for a 3-yard touchdown.  The ensuing two-point conversion was good and the Bulldogs took an 8-6 lead over the Tigers.

The Tigers scored twice in the second quarter to take an 18-8 lead into halftime. Greene County retook the lead on a 20-yard strike from the quarterback Karon Coleman Jr. to go up 12-8.  Coleman put another six points on the board later in the quarter on a one-yard quarterback keeper.

In the third quarter, both teams traded touchdowns as Montevallo was unable to make up ground on the Tigers.

Montevallo’s first possession of the second half ended in a punt but a fumble by the Tigers on their first play of the drive put the Bulldogs in scoring position.  The Bulldog’s Tyler Olds scampered around the left side for a five-yard touchdown run to pull Montevallo to within four points of the lead.

The Tigers returned the following kickoff for a touchdown to push their lead back to 10-points.

Montevallo’s final touchdown of the game was a 32-yard rushing touchdown from Davion Gilbert to make it 24-20 in favor of the Tigers.

Greene County took control of the game and finished the game with 21 unanswered points to cruise to the 42-20 victory.

Montevallo is now 1-44 in their history when allowing a team to score over 40 points in a game.

The Montevallo defense struggled to contain the rushing attack of Greene County and surrendered 302 yards on the ground.  Coleman also threw for 226 yards in tonight’s game.

On the offensive side of the ball, the Bulldogs ran a balanced attack and gained 174 yards rushing and had 130 yards through the air.

Sullens went 4-of-13 and passed for 85 yards before exiting the game in the third quarter with an injury.  Sullens also rushed for 39 yards in tonight’s game.

The leading rusher for the Bulldogs was Gilbert who rushed for 84 yards after coming in to play quarterback for the injured Sullens and went 5of–8 for 45 yards from under center.  Gilbert also had 14 receiving yards in the first half.

Montevallo will travel to Oakman next Friday night, October 13th, before returning home to finish out their region schedule.

Pelham turnovers are costly in 55-14 loss

By ERIC STARLING | For the Reporter PELHAM – After stepping out of Region to play crosstown rival Thompson last... read more