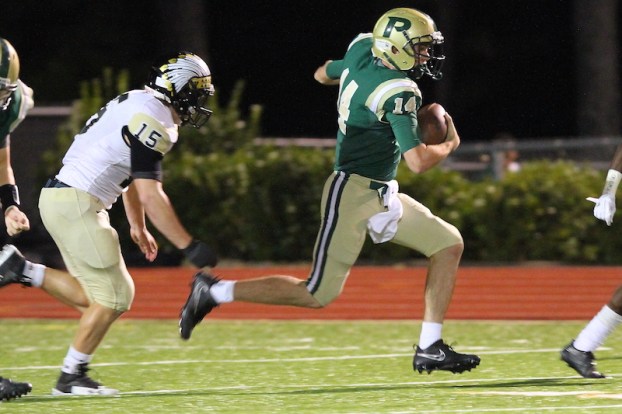 Matthew Rye returned from a shoulder injury in the game and played solid, especially early on, but the Panthers fell big due to several turnovers. (For the Reporter/Eric Starling)

Pelham turnovers are costly in 55-14 loss

PELHAM – After stepping out of Region to play crosstown rival Thompson last week, the Panthers returned home to host a hot undefeated Wetumpka team.  After keeping it close for most of the first half, mental mistakes began to take their toll and the Panthers never recovered.

Pelham’s defense started strong holding the Indians to a three and out on their first possession.

The Panthers started at their own 35-yard line and focused on the run game.  Several misdirection plays and a fake handoff to Nicolas Blackburn allowed Brandon Sledge to rumble 46 yards to the Indians fifteen.  Sledge finished the night with 60 yards rushing.  Matthew Rye hit Kasey Clark for the 7-yard score.  Gregory Blue hit the extra point giving the Panthers the early 7-0 lead.

Wetumpka tied the score up on their next drive when Jadarious Martin hit Keedrick Adams for the 15-yard touchdown.

After the two teams swapped possessions, Pelham began deep at their own 14-yard line.  A balanced run and pass series moved the ball into Indian territory and on third and one it looked as if the Panthers had been stopped.

However, a quick measurement showed that the nose of the ball was just passed the line to gain, and the drive continued.  Two plays later, Rye connected with Edward Gipson for the 18-yard score.  Gipson finished the night with three receptions for 68 yards to lead the Pelham receiving corp.

The Indians scored on their next two drives pushing them out to a 21-14 lead.  The key turning point in the game however, came with 1:48 remaining in the first half.  Rye’s backward pass sailed over the head of his receiver, and the Indians scooped up the live ball and ran it in for a 42-yard score and a 28-14 halftime lead.

“We gave them the two touchdown lead in the first half and never recovered,” stated Coach Tom Causey.  “They are a great team and are undefeated for a reason.”

The Indians capitalized on three more Panther turnovers in the second half, and finished the night with the 55-14 victory.

By SETH HAGAN | For the Reporter COLUMBIANA – Football is a game of inches, but it’s also a game... read more