COLUMBIANA – A 19-year-old Birmingham woman is facing up to a decade in prison after she was arrested and charged with allegedly striking a child in the face with a belt earlier this year. 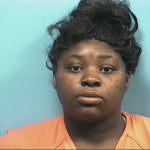 The Alabaster Police Department arrested Raleisha Nicole Davis, who lists an address on CSJ Bennett Drive in Birmingham, on Oct. 6 and charged her with one felony count of willful abuse of a child younger than 18.

The offense occurred on Feb. 11 when she allegedly struck a child who she “had the permanent or temporary care or responsibility for” in the face with a belt.

She is set to appear in Shelby County District Court in Columbiana on Oct. 26 for a preliminary hearing at 8:30 a.m.